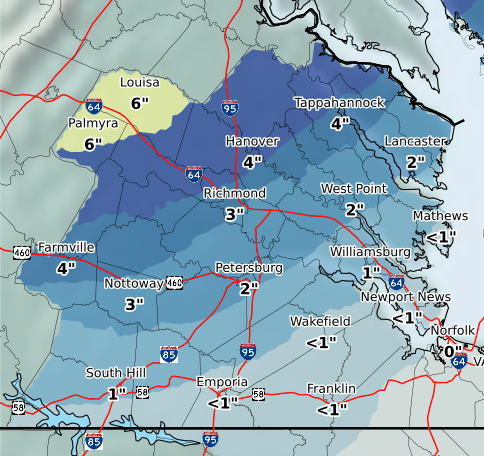 NATIONAL WEATHER SERVICE Lunenburg County could see 2-4 inches of snow over the weekend, according to a Thursday afternoon report by the National Weather Service in Wakefield.

As snow, sleet and freezing rain is likely to approach the Heart of Virginia this weekend, the National Weather Service (NWS) in Wakefield Thursday afternoon issued more approximate snow or sleet projections ahead of the storm.

Probabilistic snowfall estimates between 2-4 inches of snow in Lunenburg County.

There is a slight chance of snow, 20 percent, projected after 1 p.m.

The wintry weather is projected to increase Saturday evening, with chance of precipitation at 90 percent. Snow, sleet and freezing rain is projected. New snow and sleet accumulation of less than one inch is possible.

Snow and sleet could be a possibility Sunday night before 7 p.m. After 7 p.m., chance of snow and freezing is likely until 1 a.m., where there is a chance of snow after 1 a.m. Chance of precipitation is 60 percent.

The chances of snow or a wintry mix decreases by Monday, with only a 30 percent chance of precipitation or snow before 1 p.m.