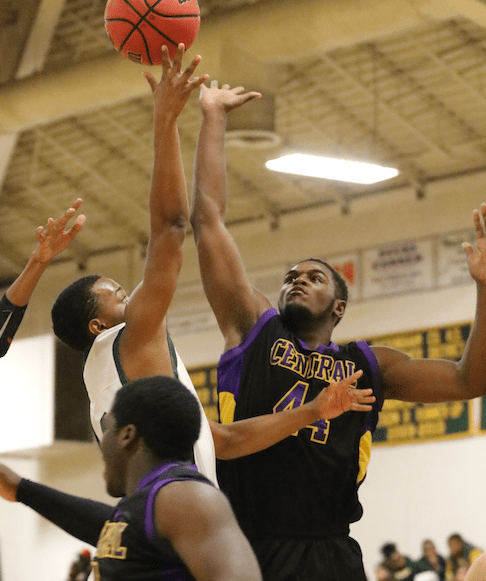 Central High School senior forward Khalil Moore goes for the block in a game earlier this season. He has made a difference for his team in the paint at both ends of the floor.

“We need to win both games,” Chargers Head Coach Mike McGrath said. “Both games are winnable for us.”

The top eight teams in Region 1B qualify for the regional tournament.

“We are, right now, No. 8 but need a win to secure the spot, for sure,” McGrath said. “The (No.) 9 team could beat us out by a very slim points margin if we lose the last two games.”

The Chargers are looking to rebound from a difficult stretch of games last week.

They fell 69-22 to visiting elite Goochland High School on Thursday.

“We got off to a very slow start, and you cannot play catch-up against a team as good as Goochland,” McGrath said. “Another bad night shooting from the floor hurt us too. They did a great job of limiting Khalil Moore in the middle too.”

Moore, a senior forward, has emerged as a standout for Central.

On Jan. 30, the Chargers lost 65-40 on the road against Amelia County High School.

McGrath noted that this was a seven-point game at halftime.

“We went cold shooting in the second half, while Amelia had one player hitting long three-point shots — six in the second half to be exact,” the coach said. “We had a good defensive effort; (we) just needed to make some shots to stay in the game.”

Moore led the team with 18 points and 13 rebounds.

Central opened its week at William Campbell High School on Jan. 28 and returned home with a 66-27 loss.

William Campbell (WC) is “a hard place to travel on a Monday and play,” McGrath said. “Fatigue from the previous week’s games played a factor in our lack of energy. WC uses their size very well and dominated us on the boards.”

Like in the subsequent game, Moore had a double-double of 18 points and 13 boards.