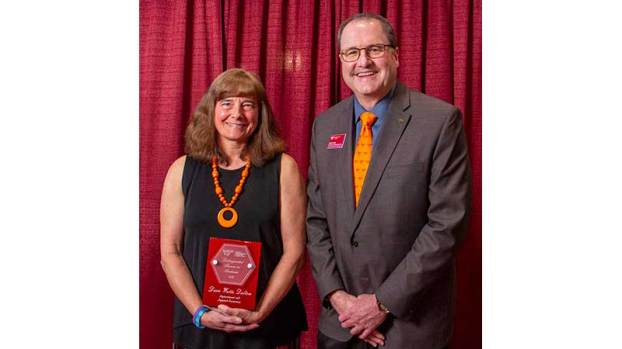 Dr. Dixie Watts Dalton, Dean of Humanities, Social Sciences and Business at Southside Virginia Community College (SVCC) is Virginia Tech’s (VT) Department of Agricultural and Applied Economics’ recipient of the Distinguished Alumna in Academia Award. The award is presented by VT’s College of Agriculture and Life Sciences during its “Celebration of Ut Prosim,” the college’s alumni organization’s annual recognition program. Ut Prosim is the university motto meaning “That I May Serve.”

For 17 years at Virginia Tech (VT), Dr. Dixie, as she was known by her students, taught numerous classes, provided leadership to the undergraduate program, and contributed academic and career advising to undergraduate and graduate students in VT’s Department of Agricultural and Applied Economics. In recognition of her teaching and advising contributions, she was selected as VT’s recipient of the outstanding teaching award and the outstanding advising award — both in the same year. At the national level, she received teaching awards from the North American Colleges and Teachers of Agriculture Association and the Agricultural and Applied Economics Association. In addition to teaching and advising, she contributed to Virginia’s agricultural industry through her extension work. In recognition of those contributions, she received Virginia Farm Bureau’s Service to Agriculture Award and the Virginia Cooperative Council’s Cooperative Education Leadership Award. She continues to make a positive impact in her current position at SVCC.

Dixie has played a major role on the VT College of Agriculture and Life Sciences Alumni Organization board of directors. Beginning as a departmental faculty representative in the 1900s and more recently as a director, she has served as vice president, president and past president. During the presentation of her award at the college ceremony, this was said of her contributions: “Always working quietly but effectively and always in the spirit of Ut Prosim, Dixie has provided steady, thoughtful, and consistent leadership throughout her career for the Department, the College, Virginia Tech and Virginia.” During the ceremony, in addition to receiving the alumna award, she was also recognized by current president, Rachel Kohl, for her two years of service as the alumni organization’s president.

Dr. Dalton is married to Johnny Dalton and resides in Kenbridge.