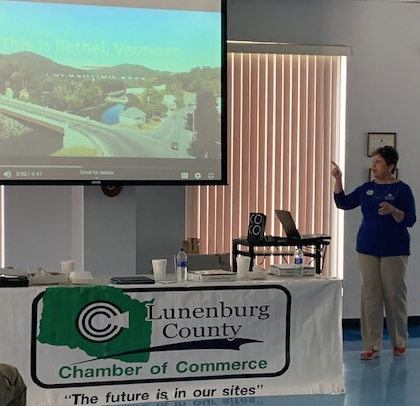 Helen Person, vice president and director of marketing at Benchmark Community Bank, speaks about town revitalization during the Lunenburg Chamber of Commerce meeting.

Helen Person, vice president and director of marketing at Benchmark Community Bank, spoke during the Lunenburg Chamber of Commerce’s May meeting.

Person, according to Ashley Sweitzer with the chamber, provided information on the redevelopment of small towns and bringing development projects into the Victoria and Kenbridge downtown areas.

She asked those attending what they remembered about their downtowns growing up, such as locally-owned drug stores with the soda fountains and ice cream floats, local shopping, and even drive-in movie theaters.

Person suggested creating activities to bring in people and keeping them shopping in town.

She suggested having restaurants with sidewalk seating where people can shop at various places and then take a break for some food or drinks. Having a day to clean up storefronts was mentioned, where the community comes together and paints, refinishes, and clean all of the various store fronts in both of the downtown areas. Plant flowers and make the downtown area open and inviting.

Person showed a video on a community in Bethel, Vermont that did this, they called it a Better Block Weekend.

“Where when the community had revitalized the store fronts, they had vendors, music, food trucks, and various activities to bring the community back to the downtown area,” chamber officials cited.

Person emphasized that with Benchmark Community Bank being an active part of the community, they would be willing to help and assist to bring revenue back in to the county of Lunenburg.

The next meeting is scheduled for Thursday, June 27, at The Victoria Restaurant. Speaker will be Lunenburg Sheriff Arthur Townsend.