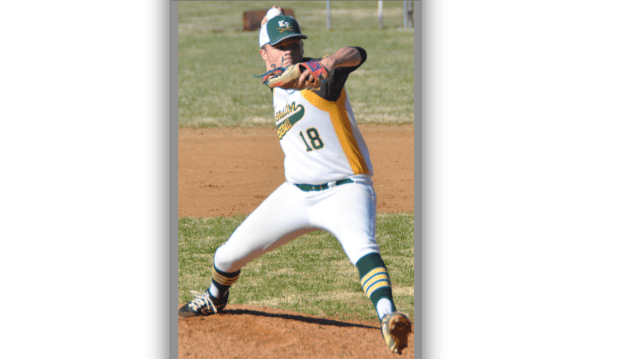 Kenston Forest School senior Daniel Parham made the 2019 all-state and all-conference first teams. Playing ‘a little bit of everywhere,’ he was the Kavaliers’ No. 1 pitcher and became a consistent presence at the shortstop position late in the season.

‘A real push for the future’

Kenston Forest finished the 2019 season with an overall record of 8-10, including a 1-1 run in the VCC tournament.

“I think we surprised especially a lot of our own people …,” Kavaliers Head Coach Joe Maione said, noting that his team was really young this year. “I started four eighth-graders, not always four all at the same time, and our (junior varsity) JV team had a solid season, so the future’s really bright. We won more than the year before after losing several key contributors that graduated the year before. We had really good leadership from our two seniors that started, and I think that really helped. They kind of bought into how we’re trying to change the culture and went with it. It was a real push for the future.”

The two seniors that started and helped lead the way were Parham and Marshall.

“They kind of did a little bit of everything for me,” Maione said.

He cited Parham as being the team’s No. 1 pitcher who ended up taking over most of the team’s shortstop duties toward the end of the year.

Maione said Marshall was the Kavs’ No. 3 or No. 4 pitcher and played a lot in center field. When Inge was pitching, Marshall would man first base.

The coach highlighted Parham as playing at an all-state first-team level.

“I think he performed that way the whole year for us,” Maione said.

He added that Parham led Kenston Forest in home runs and wins on the mound.

Inge finished with a .500 batting average, one home run, 17 RBIs and 12 stolen bases. He was intentionally walked eight times.

Maione indicated that his team saved its best performances for last this year.

“I think the last two games of the season we really made strides in the right direction,” he said, referring to an 8-6 VCC tournament quarterfinal win over Brunswick Academy (BA) and a 1-0 semifinal loss to Tidewater Academy. “We had lost to BA twice. The first time they killed us.”