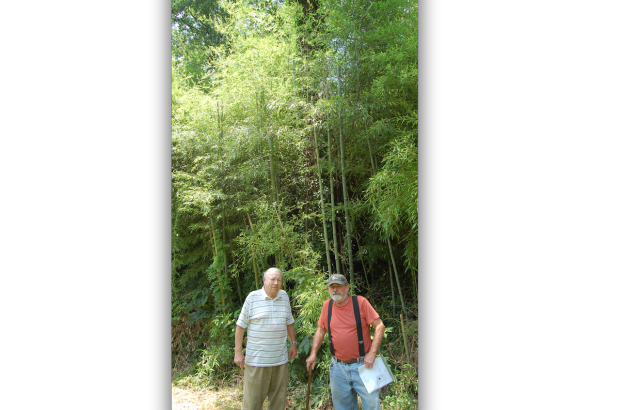 Freddie Anderson, left and Jay Dayton stand in front of large bamboo plants that have grown throughout Eighth Street in Victoria.

Bamboo cause of concern

An invasive plant along Eighth Street in Victoria has created concern for a resident, who most recently spoke about it during the Tuesday, June 11, Victoria Town Council meeting.

Jay Dayton, a resident of Eighth Street, estimated that he first moved into his current house in Victoria in 1980. The bamboo plants at that time stayed in a cluster behind the house, where a neighbor had planted it. Since then, it has spread all throughout the street. He remembers working to build an extension on his house in 1995. There were bamboo roots touching the foundation of his home, approximately 60 feet from the source of the bamboo.

“The roots have come that far,” Dayton said.

He said the bamboo bends down during heavy rain and snow. It’s crowded the power lines along the street. He said the intricate root system keeps the bamboo spreading, even when its stalks are cut down.

An invasive species, according to the United States Department of Agriculture’s National Invasive Species Information Center, consists of plants, animals, or pathogens that are considered non-native to the ecosystem it finds itself, and “whose introduction causes or is likely to cause harm.”

The Town of Victoria has an ordinance, Dayton said, which places the responsibility of ridding invasive plants, such as bamboo, on the owner of the property it originated. However, Dayton argues that the ordinance is not being enforced.

The ordinance cites that it is considered a misdemeanor for properties to have grass, plants or shrubs that exceed 10 inches tall. This also applies for grass, plants, shrubs or trees that block the line of sight on a public road or extend into another property.

“It is the requirement to keep such plants within their property lines,” Newton said.

He agreed that the bamboo spread has been pervasive.

“There are several places in town that have stands of bamboo,” Newton said. “These stands have been growing on the properties for many years … bamboo is a very fast growing plant and spreads rapidly and is very hard to control.”

“It is ultimately up to the landowner for control of the bamboo,” Newton said.

Newton said those involved are looking at options to address the spread of the bamboo.

Dayton said he has brought up the issue before.

A dog attack on Sugar Hill Road in late March resulted in the death of a neighbor’s dog. However, neighbors... read more