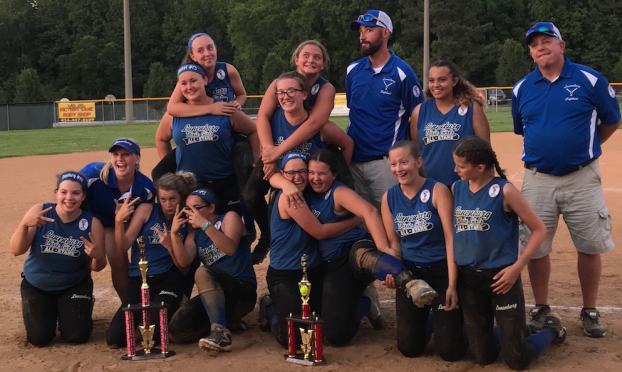 The Lunenburg Girls’ Softball (LGS) Belles all-star team did not have a long run this year, but it made a strong impression nonetheless, finishing as runner-up in the 2019 Dixie Softball Belles District 1 Tournament in South Hill and also earning the event’s sportsmanship award.

In their opening game June 23 during the three-team double-elimination tourney, the LGS Belles came back against the Dinwiddie all-star team to force what ended up being two extra innings. The Lunenburg girls ultimately prevailed 6-2 in the ninth inning.

The next day, the LGS squad struggled against the Prince Edward-Farmville Youth Association (PEFYA) All-Stars and fell 16-9.

Following a bye June 25, Lunenburg had a rematch with PEFYA in the championship game June 26, and the LGS girls were strong, losing only narrowly, 11-10.

Reflecting on his team’s performance throughout the tournament, LGS Belles Manager Justin Beagle said, “We had a really good team. They played with a lot of heart. They never quit in any game, and honestly, the other coaches and I, we couldn’t have asked for a better group of girls that wanted to play together and that just loved to be on the field.”

Within the 13- to 15-year-old age range of the Belles division, Lunenburg fielded a younger team this year.

“I know we’re losing one, maybe two, next year to the age cutoff,” Beagle said. “(Otherwise), the whole team should be back.”

The manager pointed to two of his team’s performances that stuck with him the most.

“I would say their best overall performance was probably obviously the win against Dinwiddie,” he said. “That game went nine innings … and they were able to pull it out in the ninth inning. However, I would say the one that I was most impressed with them was the final game, the championship game. They played a very poor game against PEFYA in the first loss, the 16-9 loss, and knowing that and knowing that (PEFYA) had an older, much more experienced team, they just came back in the championship game and gave it all they had, and the cards were there and they never quit fighting …”

Beagle praised his roster, highlighting clutch play from the bottom of the lineup.

Then he singled out the youngest girl on the team, Cayley Stokes, and one of the team’s oldest players, Bailey Marshall.

Of Stokes, who just turned 13, he said, “She bats third, she’s the starting catcher. With the bases loaded and two outs in the championship game, she almost hit one over the fence. … She came through with a lot of RBIs. She was on base almost every time she came up.”

Of Marshall, he said, “She pitched eight innings in the nine-inning win against Dinwiddie. She pitched all seven innings of the 11-10 loss to PEFYA. … She was clutch all the way through, very few walks.”

“I’ve never been more proud of a team that maintained their composure and remained optimistic throughout the tournament,” he said. “Even when they were faced with overwhelming odds and surrounded by a hostile and controversial environment, they maintained their love for the game and carried themselves like champions.”

The Lunenburg Girls’ Softball (LGS) Ponytails all-star team ended up with a 1-2 overall record in the double-elimination 2019 Dixie... read more