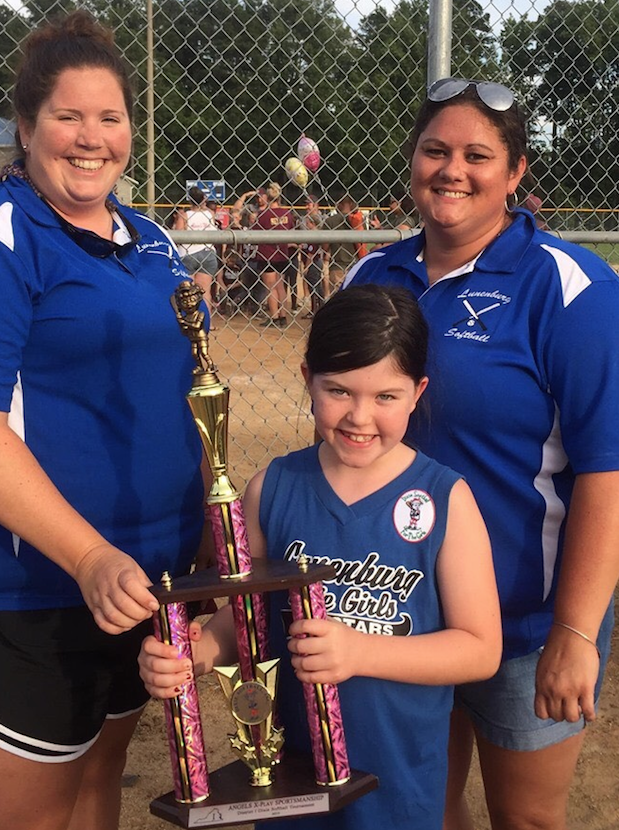 The Lunenburg Girls’ Softball (LGS) Angels all-star team went 0-2 in the 2019 Dixie Softball Angels X-Play District 1 Tournament, but the Lunenburg girls showed their character during the run and earned the tourney’s sportsmanship honor.

“As a coach, I always try and hold myself to a higher standard,” she said. “Calls aren’t always going to go the way you want, and there are always going to be plays that didn’t go as planned. But it’s so important to remember that these are just kids who you are trying to teach and impress the love of the game of softball upon. It’s so important, especially at this age, to have fun and enjoy it.”

The Lunenburg girls had a bye for the first day of the tournament, which was Friday, June 21. The next day, they faced the Prince Edward-Farmville Youth Association (PEFYA) all-star team.

“Lunenburg started out strong with great pitching by Sophia Zhe and outstanding defensive plays by her infield, including Madison Snead, Cayley Jackson, Roslyn Moses, Cadence Wallace and Addison Craven,” Manager Moses said. “The first and second innings were full of defensive and offensive standouts. Roslyn Moses made several great catches at shortstop and turned a double play. Addison Craven caught a PEFYA player stealing home for the out. Cadence Wallace and Madison Snead had clutch hits for Lunenburg scoring two runs each.”

“Lunenburg bats came alive in the second inning, and they took a 9-4 lead,” she continued. “Unfortunately, PEFYA came back with some well-timed hits in the fourth inning and held Lunenburg to a (final) score of 13-9.”

On Sunday, June 23, the LGS Angels played the Blackstone all-star team in an elimination game.

“Sophia Zhe returned to the mound and pitched a solid two innings,” the manager said. “Unfortunately the Lunenburg bats just would not come alive, and Lunenburg was eliminated from play.”

The Lunenburg Girls’ Softball (LGS) Belles all-star team did not have a long run this year, but it made a... read more