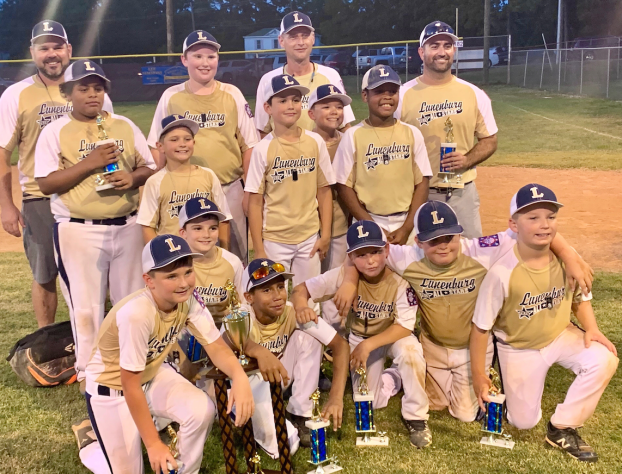 On Friday at 4 p.m., the LCYBL Minors will play the Prince George all-star team in Bedford to start their run in the 2019 Dixie Youth Baseball Minor League State Tournament.

Lunenburg finished its district run in Crewe with a 4-1 record. It entered last week at 1-1 after routing Crewe-Burkeville, the host all-star team, 20-0 on June 28 and falling 10-9 to the Dinwiddie National all-star team June 29.

The LCYBL Minors had a bye June 30, and the next day they had a rematch with Dinwiddie National that they won 11-7.

“I guess everybody could see that the performance was completely different from the first game with them,” Lunenburg Minors Manager Daylon Powell said. “It was pretty clear on the field tonight that the players played a whole lot different than the first game — they actually came to play baseball tonight.”

In the loss to Dinwiddie, the LCYBL boys loaded the bases three or four times throughout the contest, Powell said, and in one instance, a runner nearly scored to tie the game late before retreating for fear of a tag. But helping them avoid this plight in the rematch was pitcher Caleb Word.

“He did a great job tonight,” Powell said, confirming that Word pitched four full, great innings in the rematch after battling nerves at the start. “We talked to him and settled him down a little bit, and once he threw a few clean pitches, he was ready to roll.”

Next came the championship rounds against Charlotte County, a team that was fresh off two come-from-behind thrillers, including a 12-11 July 1 victory over the Blackstone all-star team in which Charlotte trailed 10-0 entering the bottom of the fifth inning.

Lunenburg jumped out to an 8-0 lead in its first game against Charlotte on July 2, and then history appeared to be repeating itself when Charlotte rallied late and tied the game 8-8 in the sixth inning. Lunenburg used the bottom of the sixth to change the story, though, earning a 9-8 walk-off victory.

The championship game set for July 3 was expected by many to be a close one, but another outstanding showing by Word on the mound and a fantastic team performance on offense yielded an 11-1 mercy rule-abbreviated triumph.

“That game they played was pretty flawless, that last game,” Powell said. “We had three errors that really weren’t errors, that weren’t the full-blown errors.”

Reflecting on his team’s 4-1 district run overall, Powell said, “I feel like we should have been undefeated, really, the whole time, but things don’t always go the way you would like it too sometimes, but it went well. I can’t complain.”

The Lunenburg County Youth Baseball League (LCYBL) Minors all-star team did what no other team could in the 2019 Dixie... read more