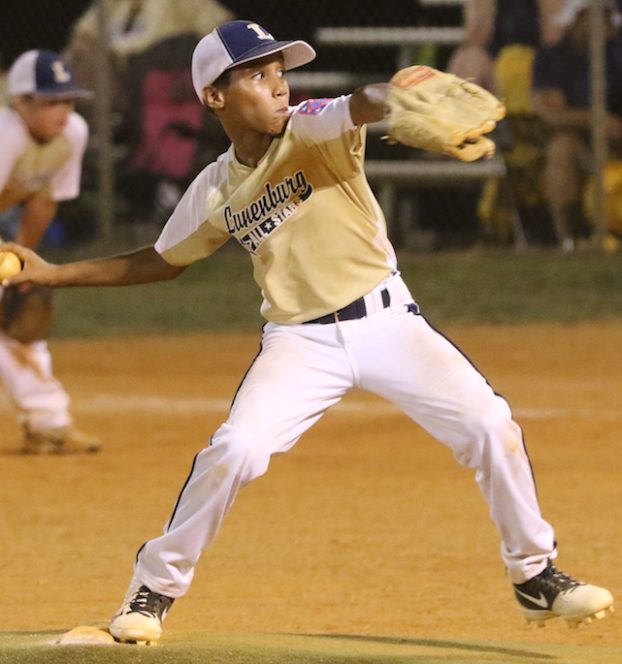 Minors start 2-1 at states in Bedford

The Lunenburg boys suffered their first loss of the tourney Monday night in a game of the event’s remaining unbeaten teams. The Bedford Metro all-star team managed to come away with a 7-6 victory.

“They had one more base hit than us,” LCYBL Minors Manager Daylon Powell said. “They had one less strikeout than us.”

In addition to uncharacteristic struggles on offense, Lunenburg also suffered from catching, throwing, base running and judgment errors, Powell noted.

“(For) 9- and 10-year-olds to be able to go to the World Series, you cannot make mistakes like that,” he said.

Sunday evening, the LCYBL All-Stars showed what they are capable of in a 14-3 rout of the Goochland all-star team.

“In my opinion, tonight was another pretty much flawless game of baseball on our side,” Powell said after the game. “I would compare it with the game we had against Charlotte Court House for the (district) championship when we beat them the second time.”

Contributing on the mound was Caleb Word, Cohen Berkley and Ethan Blowers.

To start its state run, Lunenburg defeated the Prince George All-Stars 15-6 on Friday.

“That was the ugliest game of baseball,” Powell said with a chuckle. “… Kids were making errors, weren’t hitting the ball. We had one base hit in the first five innings … The only thing that helped us was show bunt and bunting, and we were able to get 18 walks and two hit-by-pitches by it, so I got 20 people on base with that. And in the last inning, we had I think it was seven base hits all together, scored eight runs in one inning.”