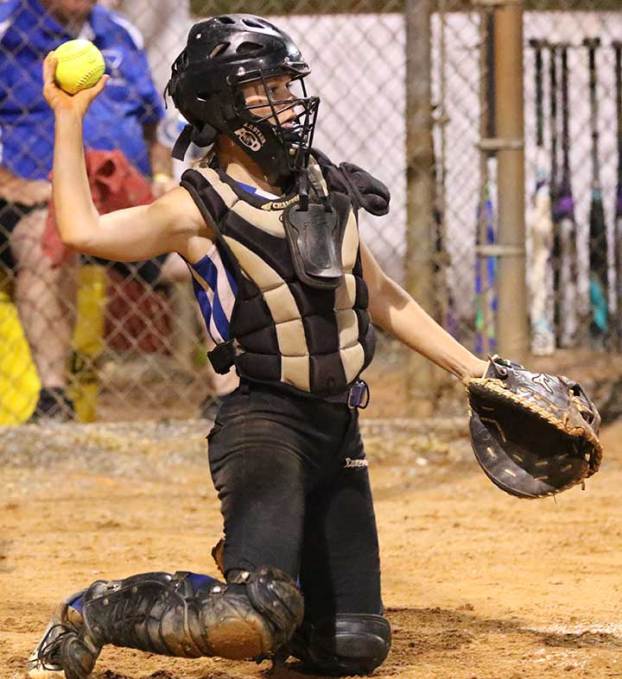 The Lunenburg Girls’ Softball (LGS) Debs all-star team experienced a rough start to its journey in the 2019 Dixie Softball Debs State Tournament on Friday in Concord, but the girls bounced back with wins Saturday and Monday.

On Monday evening, they put together a 12-1 victory, eliminating the Amherst all-star team.

“We did what we needed to,” LGS Debs Manager Michael Lewis said. “We came out first inning and put the ball in play.”

He noted that Riley Jones pitched well, throwing for three innings, and then Savanna Fowler entered the circle in relief.

The game ended after five innings due to the mercy rule.

“We definitely had some great base running tonight between Taylor Benson and Aaliyah Alexander,” Lewis said.

It was Lunenburg’s most definitive victory yet after opening its play with an 11-0 loss to the Halifax all-star team Friday afternoon.

“We didn’t play bad defensively,” Lewis said of Friday’s game. “They just hit the ball where we weren’t. We just couldn’t make contact with the ball, and every once in a while you have those type of games. But one thing it did do for us, it motivated us for the next game. We really got up and came out on fire. We decided that we did not want to go home, and that’s what we’re living for now, because we’re in the win-or-go-home mode now.”

The LGS All-Stars eliminated the Powhatan all-star team Saturday by dealing it an 11-6 loss.

Cameron Lewis pitched the entire game and also hit a two-run homer, the manager said, adding that Kaylee Williams and Alexander were outstanding in the outfield.

LGS was set to play the Buckingham all-star team on Tuesday night.