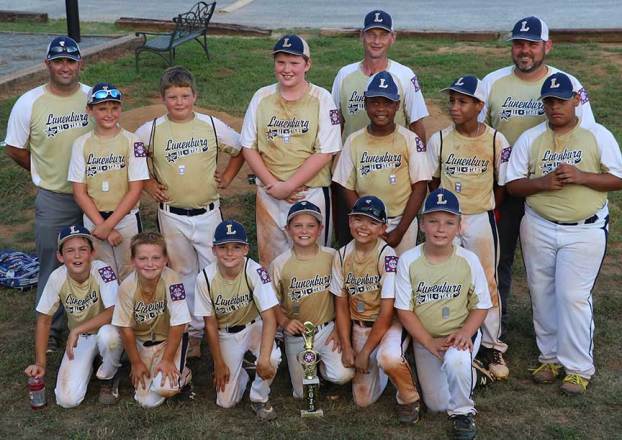 They jumped out to a 2-0 lead in the first inning, but Rustburg came back over the course of the game and held an 8-2 advantage in the sixth and final inning.

LCYBL Minors Manager Daylon Powell made a point to give credit to the Rustburg All-Stars.

“They played good defense,” he said. “I ain’t taking nothing from that team. They’re good ballplayers. They’ve got good coaching, good pitching. They hit the ball, made contact. I might have left the pitching in a little bit long this time. You can always second-guess what you chose to do. I switched what I do from one time to the next.”

“Our bats really struggled in this tournament, to be honest,” Powell said.

It was a contrast to the 2019 Dixie Youth Baseball Minor League District 5 Tournament, which the Lunenburg boys won with a 4-1 record.

“We played some good games, and we had a good run, so I really can’t complain,” Powell said. “I’m happy with the kids.”

He highlighted a couple of standouts, including Trevon Porter, who was named the batting champion of the state tourney with a .692 average.

The group will also be losing a key player moving forward.

Praising Blowers and Porter, Powell said, “Both of them are really, really, really strong athletes. We have a bunch of great athletes, but those two there, buddy, (if) they get down in the count, two strikes, I don’t worry about them — they’re coming through. … They’ve got a good way of controlling their nerves up to bat.”

Porter demonstrated this in his final at-bat during the sixth inning against Rustburg by getting a base hit despite the deficit on the scoreboard.

The Central High School varsity baseball team’s 2019 season came to a close in the first round of the Region... read more