Lemonade stands for good cause 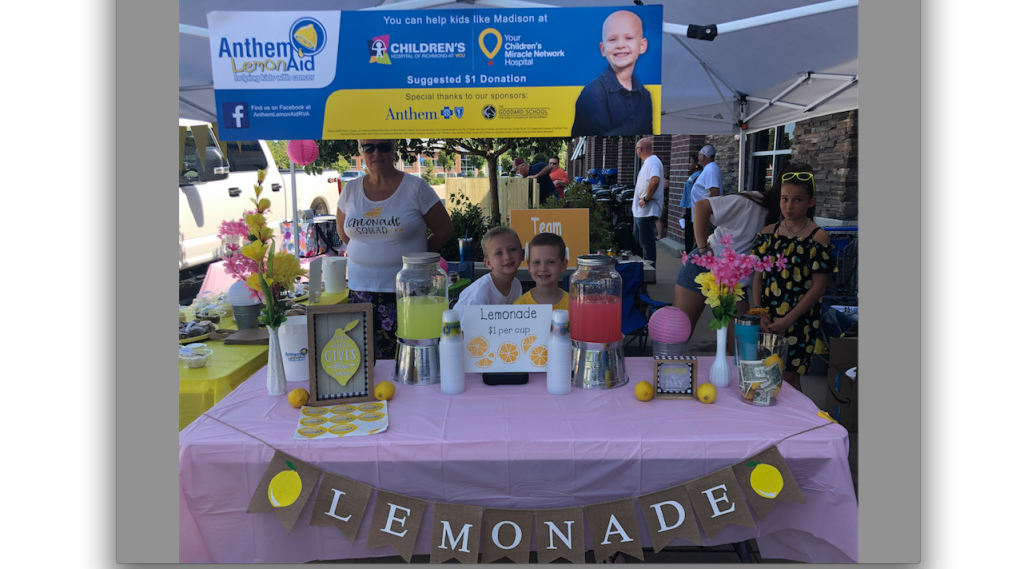 Lunenburg residents helped raise nearly double the goal of two fundraisers selling lemonade in the county last Saturday. That doesn’t count the funds raised in other areas, too.

The funds being raised are for Madison Martin, of Lunenburg, and others like her at the Children’s Hospital at Virginia Commonwealth University (VCU) through its Anthem LemonAid program.

Approximately $900 was raised in Lunenburg. Roxanne Martin, Madison’s mother said they initially had a goal of $500. In addition to raising funds in Richmond and with online donations, she said they raised a total of a little more than $2,000.

Madison, 9, was diagnosed with Germinoma, a certain type of tumor in August 2018. Roxanne said Madison has had four rounds of chemotherapy and 20 radiation treatments.

“During the time she was in treatment, she was admitted to the hospital several times for appendicitis, typhlitis, and fevers,” Roxanne said. “She received many blood and platelet transfusions and was seen in the clinic for oncology visits and labs every week. She is now cancer free. Madison will now have MRIs every three months. At this time, we don’t need anything. We have had amazing support to this point! If there is anyone who would like to do something, we encourage donating to the ASK Childhood Cancer Foundation or the Children’s Hospital of Richmond at VCU (CHoR). We participate in many fundraising events for the hospital and would love anyone who can or would like, to donate!”

For those interested in donating, the website for Team Madison can be accessed at https:// give.chfrichmond.org/ campaign/anthem-lemonaid/c225558.

Roxanne spoke about the high turnout of residents, neighbors and friends at the Lunenburg lemonade stands on July 20.

“The turnout in Lunenburg was amazing,” Roxanne said. “We saw people who braved the heat just to support Madison and her stand. In Lunenburg, we sold around seven gallons of lemonade!”