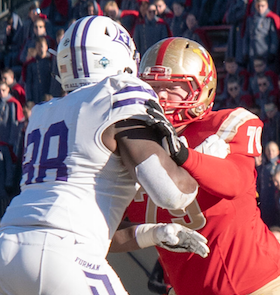 Davis stands out at VMI

Former Fuqua School star Brad Davis, of Victoria, has distinguished himself as a cadet-athlete at the Virginia Military Institute (VMI). He positioned himself in 2018 as a starting candidate on the offensive line, making the 2018 All-Southern Conference (SoCon) Preseason Second Team after adding 30-plus pounds and establishing himself as one of the team’s most improved players on offense in spring practice. Additionally, Davis, now a rising junior, has also shined in the classroom. His GPA is in the top five among all cadet-athletes at VMI. He has been named to the SoCon Honor Roll every year he has been a Keydet, and he recently received a Commissioner’s Medal for having a GPA better than 3.8.