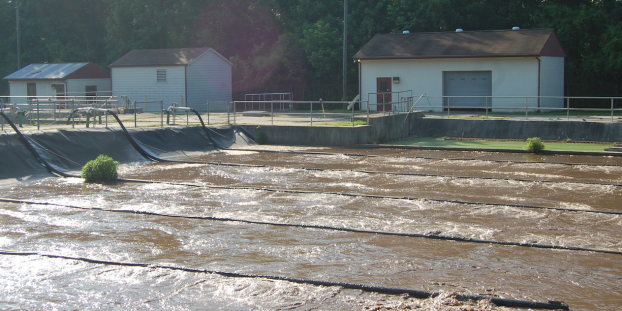 Pictured in June 2018 is the East Wastewater Treatment Plant located on Fifth Street in the Town of Victoria.

A contract between the Town of Victoria and Meridian Waste and Container First Services (CFS), the owners of the Lunenburg Landfill, allows for the town to treat leachate at the landfill at the town’s wastewater treatment plant.

“The Town of Victoria has entered into a contract with Meridian Container First Services to accept and treat leachate produced at the CFS Lunenburg landfill,” Newton said in an email interview. “Approximately 90,000 gallons of leachate are trucked to the towns waste water treatment facility weekly. The leachate from the landfill is tested quarterly by CFS as well as the Town of Victoria to help monitor what is being deposited and to minimize a detrimental effect on the treatment facility.”

Leachate, Mary O’Brien with Meridian Waste said, is defined as any liquid that comes in contact with the solid waste placed for disposal within the landfill including rainwater, beverages, non-hazardous household and commercial liquids, etc. The leachate is treated at the East Wastewater Treatment Plant located on Fifth Street. The East Wastewater Treatment Plant treats sewage and is not related to drinking water.

Newton said the contract was finalized in December 2018.

O’Brien said that since March, the average generation on leachate, due to the heavy rainfall during the year, has been 342,000 gallons per month, and she said Meridian pays the Town $0.035 (3.5 cents) per gallon. The average monthly payment to the Town for this service is approximately $12,000 per month.

Meridian and CFS recently applied for a modified conditional use permit with Lunenburg County. Modified conditions in the permit include increasing the daily tonnage allowance from 1,000 tons per day to 1,500 tons per day, to increase the height allowance from 584 feet above mean sea level to 790 feet above mean sea level (allowing for 11 additional years of capacity for the landfill), to require paving of the entrance drive 1,325 feet from Old Mansion Road within 180 days of CUP approval and replacement of the existing scale house building within 180 days of CUP approval, O’Brien said in past reports.

Lemonade stands for good cause