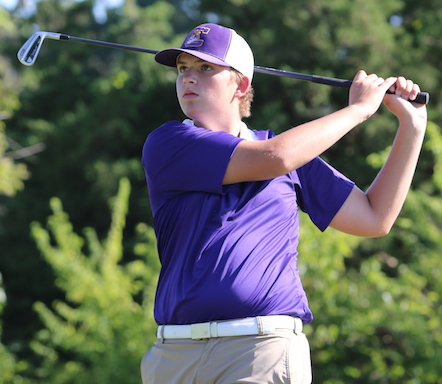 Central High School’s Cole Williams returns as a key leader for the Chargers in his senior season on the links.

CHS to ‘still be plenty competitive’

Central High School’s 2019 varsity golf team has a tough act to follow given the tremendous success achieved by its immediate predecessor, but the Chargers are poised for another successful run.

In 2018, Central became the first James River District team to defeat Randolph-Henry High School in 16 years, and while the Statesmen later retained the regular season district title, the Chargers ended up winning the district tournament championship before repeating as the Class 1 Region B champions.

Gone from that 2018 Central squad are Joseph and Thomas McDaniel, who have now graduated, but plenty of familiar faces remain.

“I’ve got four returning players, and I’ve got two freshmen that are going to be playing,” Chargers Head Coach Richard McDaniel said.

New to the team this year are freshmen Hunter Gary and Robert Hite.

Coach McDaniel said he thinks his team will certainly still be competitive.

“Last year, we won the district (tournament), and the only team we had a hard time with was Randolph-Henry,” he said. “I’m sure that Goochland and maybe some others will be a little tougher this year after losing Joseph and Thomas, but we’ll still be plenty competitive.”

He provided insight into who he expects to lead the Chargers on the links this year at the No. 1 spot.

“We’ll probably rotate like we have in the past just depending on performance, but I feel like Cole will be pretty close to that position most of the time,” he said.

“Hunter hasn’t played quite as much growing up as Robert has, but I definitely look for both of them — definitely by halfway through the season — to get acclimated and be able to contribute,” he said.

Central will next play at 3:30 p.m. on Thursday against Amelia County High School and Goochland High School at Amelia Golf & Country Club.