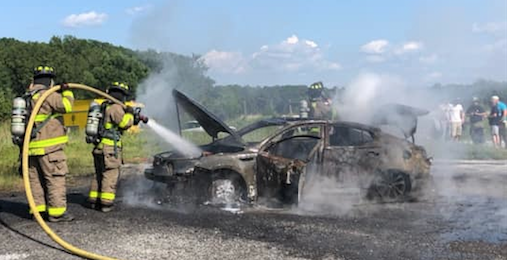 Crew members douse a car fire that took place in a vehicle July 27.

A fire destroyed a vehicle recently in Lunenburg County.

The vehicle fire took place in the area of Stone Mill Road and South Hill Road on Saturday, July 27. According to Kenbridge Fire Department Chief Richard “Dickie” Harris, the cause of the vehicle fire was undetermined.

“It probably started in the engine compartment,” Harris said.

There were no injuries as a result, Harris said, though the vehicle was a total loss.

“It was in a full blaze when the fire department arrived,” Harris said.