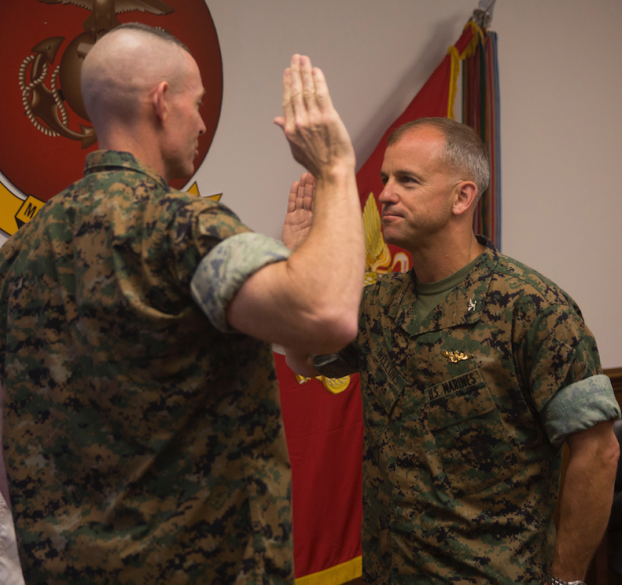 Pictured is the frocking ceremony of Brigadier General James B. Wellons, right, who is being sworn in by Major General Stephen M. Neary.

Wellons sworn in as brigadier general

James B. “Jim” Wellons, of Victoria, has been selected and sworn in as brigadier general in the U.S. Marine Corps. A graduate of Central High School in Victoria, he is assigned to the 1st Marine Aircraft Wing in Okinawa, Japan, where he is currently serving as assistant wing commander.

Wallace Owen, athletic director at Central High School, said “I am not surprised that Wellons was selected as brigadier general.” Owens continued saying, “Jim Wellons was an outstanding student, outstanding athlete and destined for greatness.” Owens went on to share that during Jim’s time at Central High School he was considered a born leader. As a student in high school he consistently worked hard and excelled at all student activities. Owen said the entire Lunenburg County community is extremely proud of Jim’s achievements and feels sure there are more to come.

When interviewed by telephone Jim said “I really feel fortunate to have grown up in Victoria, Virginia. My memories of Victoria are it is a special place with great citizens and public servants who worked hard. They reinforced values learned at home such as what is right and what is wrong and doing the right thing.

The community of Victoria included not just schools but the church I grew up in, Victoria Baptist Church and the Boy Scouts. All those memories are with me still. All working together as a community to form a consistent message to young people about the value of education, religion and pride of country. I wouldn’t change a thing about where I grew up,” He continued, “ In fact, the hardest part of all my military career has been leaving home, leaving Victoria.”

Wellons graduated from the United States Naval Academy in May 1992, earning his commission as a Second Lieutenant in the U.S. Marine Corps. His career has included extensive deployments, education and promotions. Some of these include; deployments with the 26th Marine Expeditionary Unit, graduating from the School of Advanced Air and Space Studies (SAASS) in Maxwell Air Force Base in Alabama with a M.A. in Airpower Art and Science in June 2007, graduating in March 2013 with a M.A. in National Security and Strategic Studies from the U.S. Naval War College in Newport, Rhode Island, serving as commander officer from May 2016 through May 2018 at the Marine Aviation Weapons and Tactics squadron in Doral, Florida. Jim’s military decorations include the Defense Superior Service Medal, Legion of Merit, Meritorious Service Medal with gold star in lieu of third award, Air Medal, Navy and Marine Corps Commendation Medal, and various unit and campaign awards. In June he received orders to report to 1st Marine Aircraft Wing as Assistant Wing Commander. Jim was frocked to his current rank in July.

Jim says he feels humbled and honored to serve his country. “I am so happy I grew up in the best place in the world. My family and community provided me with the support and a sense of patriotism at a young age to help me achieve my goals. My Grandfather, Jack M. Dickerson, was a pilot in WWII. I felt at a young age the call to military service. The military offers a great education by excellent people, the opportunity to be involved in important events, and the opportunity to serve your country.”

Jim is the son of Judge and Mrs. William Wellons of Victoria. He is married to the former Grayson Casper of Swansboro, North Carolina and they have three children Lilly, Lucy and Ben.

Area students head back to school

First- and second-graders William and Hugh Lynch are ready for the school year to begin. To see more photos, turn... read more