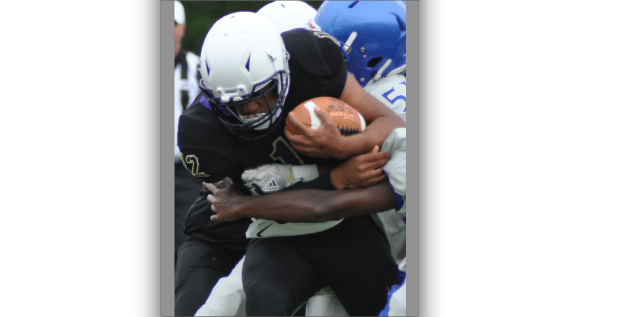 Central High School senior Khalil Wood drives forward with the ball as a host of Altavista Combined School tacklers seek to bring him down in Saturday’s benefit game.

Central High School’s varsity football team learned what it still needs to work on after Saturday’s benefit game, but the Chargers enter this week of prep for their season opener with a healthy lineup.

“They’re pretty good,” Chargers Head Coach Will Thomas said of the Colonels. “… They’ve got some fast players. They’re pretty big up front. … They’re better than they were last year, no question.”

“Defensively, they’re tough,” Thomas continued. “They get after the ball, typical Altavista stuff. They’ve got athletes and they fly to the ball, well-coached — all that good stuff. So, we’re going to have our work cut out for us.”

The Chargers will enjoy the home-field advantage this year.

“It’s nice to play those guys here, but we haven’t beat them in a while,” Thomas said. “They’ve had our number.”

The coach noted that the Colonels have some diversity to their style of play on offense, but they are largely focused on one facet of the game.

“They throw it around a little bit, but they run the ball a lot,” he said. “… They’ve got a bunch of kids that were on the state 100-meter relay team that won the state last year.”

“He’s dangerous,” the coach said. “He’s one of those kids that he drops back to pass and if he doesn’t see something he likes, he just takes off running, and he’s almost untouchable, he’s just so fast.”

Thomas was pleased with the camaraderie that his team showcased, but he noted that its performance revealed some sloppiness that needs to be cleaned up. The issues on offense included turnovers and penalties.

A positive was that despite these issues, “we still were kind of able to move the ball,” he said.

Thomas offered high praise for the other side of the ball.

“We were really proud of the way the defense played — flying to the ball, gang-tackling,” he said.

He still cited tackling as something that must be addressed in practice, though, given Altavista’s elusive and speedy runners.

CHS to ‘still be plenty competitive’

Central High School’s 2019 varsity golf team has a tough act to follow given the tremendous success achieved by its... read more