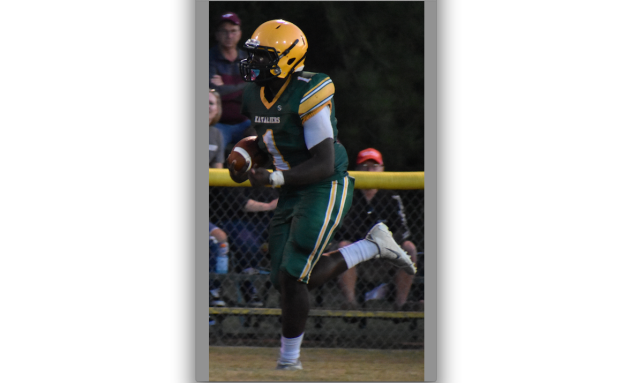 Kenston Forest Shool’s varsity football team presented its home crowd Friday night with quite a show, producing a 39-0 rout of visiting archrival Brunswick Academy to improve to 2-0 on the season.

After opening the season with a 55-0 defeat of host Lawrence Academy on Aug. 24, the Kavaliers have now outscored their opponents 94-0.

The Kavs led 31-0 by halftime Friday night against the Vikings.

“We took our foot off the peddle a little bit there at halftime,” Kenston Forest Head Coach Joseph Kaiser said after his team developed the huge lead. “The kids worked really hard. It was a great win, great first home win for us this season. Everybody contributed in a positive way. Many kids did great things for us.”

Leading the Kavaliers on the ground for the second straight game was junior fullback Quinton Hawkins, who rushed for 110 yards and two touchdowns.

Making his debut this year for the Kavs was senior running back Jah’Tavious Houston, who ran for 88 yards and a touchdown.

Junior quarterback/running back Moe’Wuante “Moe Moe” Morrison ran for 108 yards and two scores and passed for 18 yards and one score.

It was sophomore wide receiver Trey Lewis who caught the touchdown pass, a seven-yarder.

Houston, a defensive back, also caught an interception.

Kenston Forest now prepares to host Hampton Roads Academy on Friday at 7 p.m. in what will be the Navigators’ season opener.