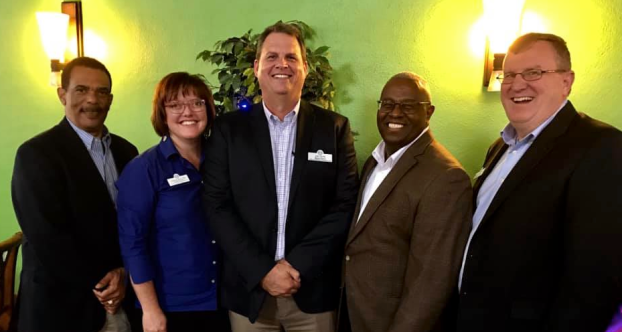 Small business has a friend in Central Virginia. It’s a friendship that’s expanded and grown since 1989 when the Longwood Small Business Development Center (SBDC) opened its doors in Farmville. In the 30 years since, Longwood SBDC has served more than 6,000 new and existing businesses from Petersburg to Martinsville.

Longwood SBDC originated with an office in Longwood’s College of Business. McGuire knows the business well — she’s been with the SBDC in a variety of capacities for 25 years.

“Today Longwood SBDC has a territory that covers 9,471 square miles and includes 20 counties and five cities,” McGuire says. “Growth started as soon as other localities heard about SBDC. South Boston joined SBDC in 1991, then Martinsville was added in 1997 and finally Petersburg in 1999. It’s a big territory.”

“PHCC has enjoyed its partnership with SBDC,” Godwin says. “Entrepreneurship is alive and well in our region, and this collaboration further enhances our work.”

“Longwood SBDC is a vital part of Danville’s economic development framework that enables us to extend our reach throughout the region,” he adds.

Reaching small business owners in an increasingly tech-savvy world has necessitated some changes to SBDC’s business model as well.

“We adapted through the years by adding contract consultants that specialize,” McGuire explains. “Existing businesses tend to be more specific with the issues they bring to us — and we’re seeing more existing businesses now versus start-ups.”

“In recent years SBDC has adapted its marketing,” McGuire adds. “We are sharing our client success stories through a variety of outlets, so that other business owners will understand exactly what we do. From a business owner’s perspective, that’s important.”

“Longwood SBDC helped us think through all the details,” states Bobby Long, co-owner of Long’s Farm Supply in Brookneal. “When I went to Longwood SBDC, I was looking for an objective and professional opinion — and that’s what I got.”

“Our business has grown since we’ve been working with Longwood SBDC,” he says. “Our SBDC consultant was super helpful in giving us a roadmap so that the growth we’re experiencing is good growth.”

“The business plan SBDC helped me with included description, vision and projections — everything was there,” comments Tonya Haley, owner of Haley’s Honey Meadery in Hopewell.

McGuire sees the variety of her work at SBDC as a plus.

“It’s a different case study every day — like putting pieces of a puzzle together,” she notes. “I enjoy providing the resources that can bring that puzzle together.”

McGuire is pleased with the assistance Longwood SBDC continues to provide to small business owners. Future plans include expanding consultant expertise, integrating technology training through partnerships with Microsoft, and partnering with the GO Virginia initiative.

“I tell clients that SBDC services are an investment made by local and federal government, economic developers, and Longwood University. That investment’s paid back through business tax dollars as the economy grows,” McGuire concludes. “Every small business owner should take advantage of that.”

Lunenburg County Public Schools (LCPS) students were recognized at the Sept. 9 school board meeting for receiving one or more... read more