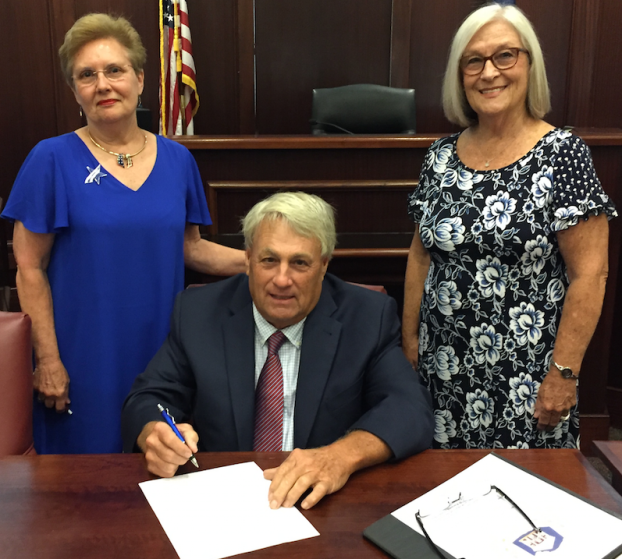 Randy Slayton, Chairman of the Lunenburg County Board of Supervisors, signs the proclamation for the celebration of Constitution Week. Chapter Regent Linda Bagley, left, of Kenbridge; and Vice-Regent Betty Winn of Alberta look on.

The William Taylor Chapter of the National Society Daughters of the American Revolution (DAR) encourages all citizens to join in the celebration of Constitution Week, commemorating the signing of the U. S. Constitution, America’s most important document. It is celebrated annually during the week of Sept. 17-23.

This celebration of the Constitution was started by the Daughters of the American Revolution. In 1955, DAR petitioned Congress to set aside Sept. 17-23 annually to be dedicated for the observance of Constitution Week. The resolution was later adopted by the U.S. Congress and signed into public law Aug. 2, 1956 by President Dwight D. Eisenhower.

The DAR has also erected a structure that is built in tribute to the Constitution of the United States. DAR Constitution Hall, which is a performing arts center, opened in 1929.

Constitution Week is a great time to learn more about this important document and celebrate the freedoms it gave us.