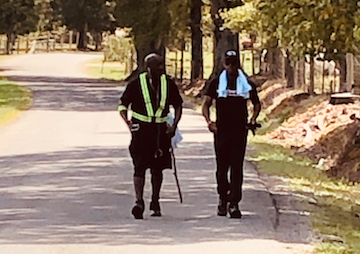 Pictured are, from left, Andrew Fitzgerald and Renaldo Pearson.

Renaldo Pearson walked through Victoria on Friday, Sept. 6, representing Democracy911, an activist movement walking 600 miles, from Atlanta, Georgia to Washington DC, in an effort to end political corruption. Pearson has been walking since Aug. 6 starting in Atlanta, Georgia. According to Pearson Demoncracy911 is declaring a state of emergency on American Democracy to fix the “corrupt political system.”

The main goal of Democracy911 is threefold; to protect the right to vote, to make elections secure and competitive, and to end political corruption.

Pearson, a graduate of Morehouse College with a BA in Political Science, worked at Harvard University as senior adviser to the faculty of deans, worked for Democracy Spring and currently is the director of external affairs for a nonprofit organization called RepresentUs. According to its website it is funded by contributions from private citizens, philanthropic organizations and Hollywood elites. RepresentUs supports and endorses passing reforms at the state and local levels that fight corruption thereby giving more power to everyday people. Its plan is to build enough momentum to take this movement to the federal level. They partner with local coalitions and choose targets wisely, opting for campaigns that are winnable and impactful.

According to their websites both Democracy911 and RepresentUs are transpartisan organizations. Transpartisan is an emerging field that advocates pragmatic and effective solutions to social and political problems, transcending and including preexisting political ideologies. Transpartisan democracy, in part, seeks to reintegrate the public’s voice in identifying, debating and shaping governmental policies, while continuing to protect the sovereignty of the individual.

Pearson when asked about his goals stated, “we hope to get all the presidential candidates to pledge to unrig the system, get the Senate to pass HR1, and to turn the tide of corruption. We have an existential crisis in health care, in mass shootings and environmental crisis with a deadline of 12 years.” When asked if these crises align closely with the democratic presidential candidates supporting socialist changes, Pearson stated “all these crisis’ must be addressed for our children’s children well-being.”

“We have a government of, by, and for profits,” said Pearson. “We must overcome today before it’s too late,” Pearson concluded.