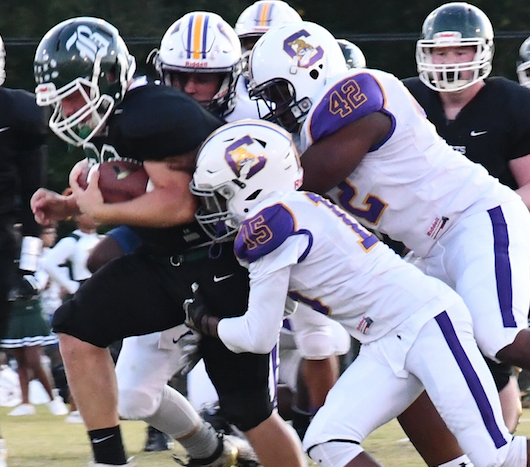 Central High School defenders Nyjae Carter, No. 15, and Shamond Sellers, No. 42, look to bring down the Buckingham County High School runner on Friday night in Buckingham.

Central High School’s varsity football team faced a tremendous challenge in the form of host Buckingham County High School on Friday, and the Knights jumped out to a 21-0 in the first quarter on their way to a 35-6 victory over the Chargers.

Will Thomas, Central’s head coach, said he did not feel too good about his team’s performance.

“Buckingham’s good, man,” he said. “I tell you what, they’re as good as I’ve seen them in a long time. They’re strong, they’re fast, they’re well-coached.”

He indicated that the Knights were an intimidating force to his team as they began to experience success Friday, and while he noted his team did not play its best, he knew why.

“The reason we didn’t play our best (is) because Buckingham’s good,” he said.

Last season, the Chargers won 14-7 in overtime against the visiting Knights, but Thomas said what made Buckingham so much more imposing this year is the fact that it was bigger, faster and stronger.

“My hat’s off to them,” he said. “I don’t know if we could ever have anything for them this year because they’re doing it, they’re on point. So, that’s really all I could say about it.”

Thomas said he did not have any individual Chargers standouts to cite.

“I thought we all equally played poorly,” he said.

But he expressed optimism about his team’s future overall.

“We’re going to get better,” he said.

After having studied some Dukes game film, Thomas said they are athletic as usual.

“They’ve actually got some size this year, which is a little unusual,” he said. “Their front on defense and offense is big.”

“He’s a load,” the coach said. “He runs hard and breaks tackles. You’ve got to hit him low.”

The coach said sophomore wide receiver Kyler Gilliam had some good runs in the film he saw.

“They get after you on defense,” Thomas said. “… So we’ll have our work cut out for us again this week.”

Central High School’s varsity football team learned what it still needs to work on after Saturday’s benefit game, but the... read more