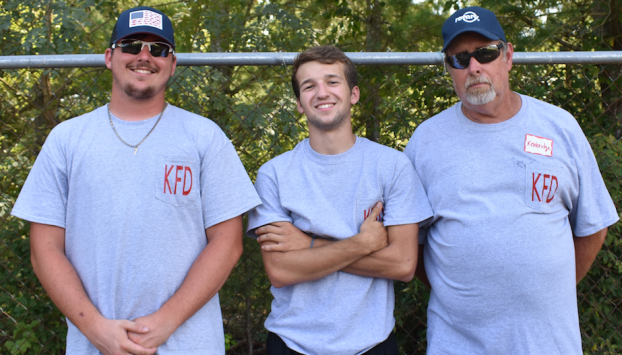 From left, Jackson Dalton, Noah Dunbar and Moris Hudson take a break from cheering on their fellow firefighters to pose for a picture.

Sept. 21 was a successful day for members of the Kenbridge Volunteer Fire Department (KVFD), who came home with the title of Best Overall at the Southside Virginia Volunteer Firefighters Association’s (SVVFA) 64th annual Firefighters Convention.

The competition, held in Farmville, started at the Firemen’s Sports Arena at 1328 Zion Hill Road. After registration and a quick call to order, firefighters attended a memorial service to honor fallen members from the SVVFA’s 58 various departments.

Firefighters then joined together in the afternoon for a parade. Tankers both old and new flashed lights and sounded sirens as they drove through downtown Farmville.

In addition, awards for Best Pumper and Best Equipped Brush Truck were given to KVFD firefighters Mike Gee and Jake Rifkind.

The day’s events were wrapped up with a banquet at the Fishin’ Pig in Prince Edward County. After scores were totalled, the KVFD returned home with heads held high and a Best Overall title under their belts.

“I wanted to congratulate each one of the Kenbridge firefighters who participated,” said KVFD Chief Richard Harris. “They did a great job in representing our department, and they do a great job for us at home.”