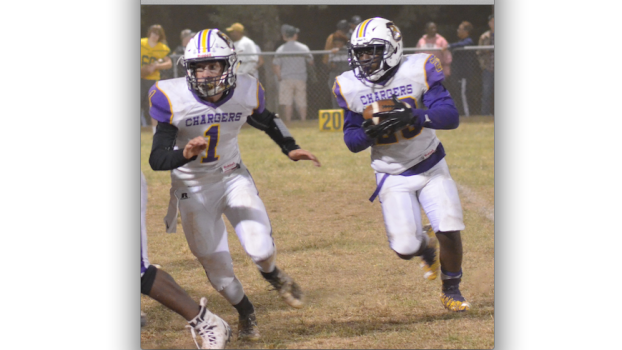 Central High School’s varsity football team dueled Friday night with host Amelia County High School as the two programs generated more than 100 points combined when all was said and done, battling into a third overtime when the Chargers were able to land the knockout blow, defeating the Raiders 56-50.

“Defense, at the end of the game in overtime, they bailed us out,” Central Head Coach Will Thomas said. “They didn’t play as well, especially the first half. We got a little bit better, and in overtime, they really played well, really stepped up, because we didn’t score in one of the overtimes, and so we had to stop them from scoring, and (we) did.”

Each overtime session consisted of four downs for both teams’ offenses, starting from their opponent’s 10- yard line.

Scoring the winning touchdown for Central was senior running back Daequan Lee on a run up the middle.

“It was a short run, probably three or four yards, but he was carrying people, kind of like he did the whole game,” Thomas said. “He had a really good game.”

Lee finished with 29 carries for 201 yards and six touchdowns. Across the last two games combined, he has run for 400 yards and 10 touchdowns.

On defense, senior Kawonte’ Ragsdale had 16 tackles, including eight solo and four for a loss, along with a forced fumble. Anthony finished with 12 tackles.

The few, the outstanding