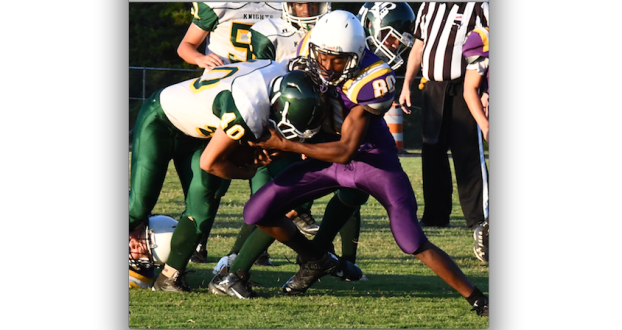 Central High School’s defense, including freshman Jamal Alexander, No. 80, clamps down on a Buckingham County High School ball carrier during a JV game earlier this season that the Chargers won 16-8.

Central High School’s junior varsity (JV) football team improved to 5-1 on the season and 4-0 in the district last week with its 36-6 victory over visiting Amelia County High School.

“They’re getting better every week,” he said. “They’re learning. It’s a big learning curve for some of them, and we’ve got a lot of first-year kids that have never played before.”

The team is sparked this year by a significant uptick in the number of players on the team. McGrath said he started with 21 last year and finished with 15; this year, he started with 37 and, even after injuries, still has 35.

“It’s been nice,” he said. “We’ve only got a couple of two-way players. That’s nice for a JV team to be able to have 11 on (offense) and 11 on (defense), so hopefully we can keep those numbers coming.”

He noted that the squad could have 40 members next year.

Central opened the season Sept. 4 with a 48-12 blowout of visiting William Campbell High School. On Sept. 12, the Chargers experienced their only loss so far, a 32-28 defeat against host Brunswick High School.

“The Brunswick game was kind of a letdown,” McGrath said. “They returned two fumbles for touchdowns on us, and that’s how they beat us. But hey, that was a good learning point for us. (Our players) learned, hey, you turn the ball over, you’re going to get beat, and it doesn’t matter how much better you are than the other team. Brunswick, they were tough. We’ve had some tough games, and we’ve had a few good ones where we could get a lot of young kids in.”

A championship title is awarded to the JV team that ends up being the outright winner of the James River District (JRD).

In an interview prior to Central’s Amelia game, McGrath said, “If we can make it to the end and square it with Goochland, that could potentially be a title game, not overlooking Prince Edward or Nottoway or Amelia at all, so I’m trying to keep the kids focused on the game in front of us.”

The team’s overall goal is definitely to bring home a title, though.

“I think the last JV team of ours to win the district was in 2014,” McGrath said.

Central has a variety of contributors helping make real the possibility of another title.

“We’ve got an eighth-grade quarterback who’s done pretty well, Connor Mattox,” the coach said. “We kind of threw him in the fire, and he’s handling it pretty good, and then we’ve got four or five guys running the ball that just have been fantastic.

“We’ve got another eighth-grader at fullback, Seth Bishop,” McGrath continued. “Then we’ve got Dasjohn Hurt, his first year with us at running back. Antwaun and his brother A.J. Jones (Jr.), they’ve been running the ball well, Lattrell Johnson’s run the ball well. Those guys have really done well, and the line is young — they’ve been working hard and getting better and better.

“Both of our tight ends are twin brothers, Ben and Ethan Currin,” the coach continued. “(It’s) their first year playing, and they’ve done phenomenal, so it’s been good.”

Playing for the JV team is good prep for players who will soon be moving up to the Central varsity squad.

Comparing the offensive systems of Central’s JV and varsity teams, McGrath said, “We basically both run double wing, and then we both have a few things we throw in. We don’t quite have the speed that the varsity’s got, so we can’t run everything that they run.”

He indicated that the JV squad runs most of the time, but added that “we can throw the ball a little bit.”

The Chargers are set to visit Prince Edward on Thursday at 6:30 p.m.