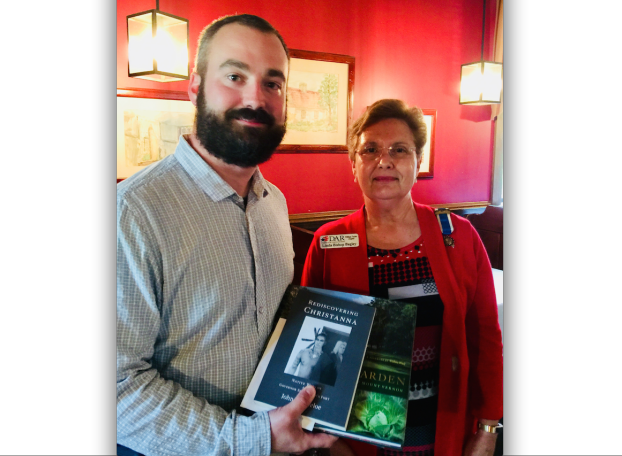 Fred Taylor, who spoke at the Kennon House in Gasburg to the William Taylor Chapter, National Society Daughters of the American Revolution, is shown here with Chapter Regent Linda Bishop Bagley who presented him with books for his collection.

There could have been no more appropriate October meeting place than the Kennon House Restaurant in Gasburg when the William Taylor Chapter NSDAR heard from lawyer-historian Fred D. Taylor the details of the life of Richard Byrd Kennon.

Taylor holds a Bachelor of Arts degree in History from Old Dominion University and a juris doctor from the Mercer University School of Law. He is a founding partner of the law firm Bush & Taylor in Suffolk, where he lives with his family. Taylor continues to be a student of history, a researcher, a collector and a writer. His work has appeared in a number of historical journals, and he is frequently called upon as a speaker.

Taylor’s presentation for the Daughters of the American Revolution (DAR) was on the life of Richard Byrd Kennon, a native of Norfolk, who was the descendant of a distinguished Virginia family. Kennon spent the majority of his childhood in and around Richmond

Prior to the War Between the States, he married the daughter of future Confederate brigadier general Philip St. George Cocke. During the war, Kennon served with distinction on the staffs of noted Confederate generals, among them J.E.B. Stuart and others. Following the war, Kennon moved with his family to manage one of his wife’s family’s holdings, Pea Hill Plantation in Brunswick County, where his home today operates as the “Kennon House” restaurant in Gasburg.

Many William Taylor chapter members live in Brunswick County and environs and were very interested in the Kennon family history and the historical significance of the quaint building in which the restaurant operates.