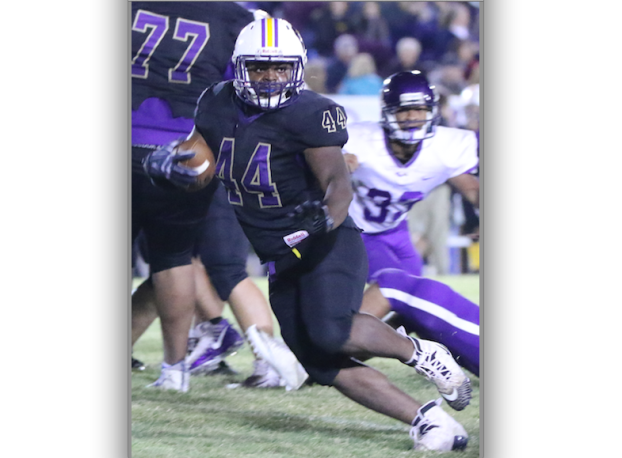 Central High School senior running back Daequan Lee, No. 44, prepares to fend off a defender while his teammates block for him Friday, Oct. 18 during the Chargers’ homecoming game. He has run for 607 yards and 15 touchdowns across Central’s last three games.

Central High School’s varsity football team added another high-scoring chapter to its rivalry with Prince Edward County High School on Friday, Oct. 18, as the Chargers held off the visiting Eagles for a 56-44 homecoming victory.

“Our boys played hard,” Central Head Coach Will Thomas said. “Prince Edward played hard. They didn’t quit. They went hard. I’m glad we got up two scores on them, because if we wouldn’t have, we’d have been in trouble. So as long as we could keep two scores up, I felt pretty good about ourselves, because were weren’t going to stop (their offense).”

Thankfully, the Chargers’ own offense was firing on whatever cylinders were available.

Central had three key seniors limited by injury, including Jones, Wood and T’zion Wilkerson. Senior Daequan Lee and sophomore Nyjae Carter helped shoulder the load on offense in their absence.

Lee finished with 22 carries for 207 yards and five touchdowns, gaining 9.4 yards per carry. In the last three games, he has run for 607 yards and 15 touchdowns.

“He’s just running hard,” Thomas said. “He’s 240 pounds, and he’s quick, so he’s playing well. He’s playing well, and the guys up front, we’re finally getting them going. They have really come a long way since that first week.”

Carter also sped away from the pack for a touchdown on an 83-yard kickoff return.

“He’s got some speed,” Thomas said.

Everything on offense was not perfect, though, the coach noted, citing issues with extra point and field goal plays.

“A lot of things we’re just not communicating correctly and just screwed up — you can’t do that,” he said. “You can’t do that and play good teams, so we’re going to have to get back on it.”

Thomas took responsibility for a poor defensive showing and emphasized the need for better tackling.

“We’re just going to have to get a lot better,” he said shortly after the game. “We’re, defensively, just not hitting on it today.”

The win improved Central’s overall record this season to 5-3. Reacting to that mark, Thomas said, “It’s good considering we started out 1-3.”

Thomas said Friday, Oct. 18, that he was not sure if Wilkerson, Jones and Wood would be back from injury.