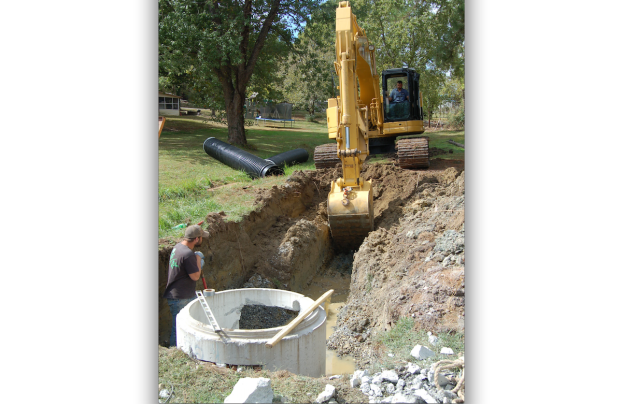 Derek Morris, foreground, and Kevin Ashworth prepare a trench for the laying of new pipe.

Fourth Street, Victoria on the mend

According to Victoria Town Manager Rodney Newton, “After investigation, it is believed that the increased frequency of flooding could have been an issue with the stormwater drainpipe.” Newton went on to say, “It is hoped that the replacement of approximately 300’ of pipe, the addition of a stormwater manhole, and the replacement of another stormwater manhole, (that) the frequency of flooding on Fourth Street will decrease.”

Newton continued, “The Public Works Department has been working this week to get most of this project completed. There will be more work to be completed in the coming weeks to accomplish the end goals of this project. The project will be evaluated and plans will be adjusted to address any new or unmet needs.”

“The Town of Victoria appreciates the landowners’ cooperation and the understanding of those in the area as roads were closed or blocked to accomplish this work,” said Newton.

An accident at the intersection of Route 40 and Eighth Street in Victoria involved a Town of Kenbridge police vehicle.... read more