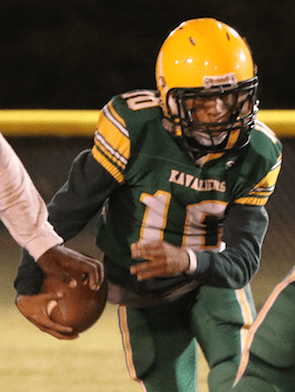 To a great extent, it has been a season of significant success for Kenston Forest School’s varsity football team, but the Kavaliers have suffered a few lopsided defeats along the way. Friday, Oct. 25, was one of the three; this one ended with a score of 42-0 to visiting St. Anne’s-Belfield School.

Kavs Head Coach Joseph Kaiser noted the Saints were very disciplined and experienced, with quite a few seniors on their team.

Capers also had a 16-yard reception, and Houston had three catches for five yards.

Houston had the most all-purpose yards on the night for Kenston Forest, logging 73, including 36 on an interception return, 20 on a kickoff return in addition to his offensive yardage.

With a bye this week, the Kavs (6-4) host the VISFL Division II title game Friday, Nov. 8.

Perfect finish to a perfect season