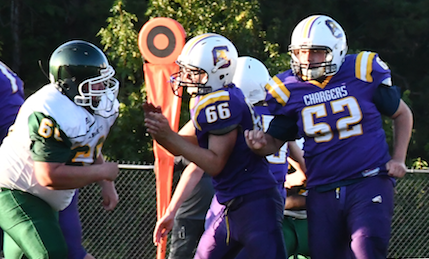 Central High School sophomore Alex Boyd, No. 66, and sophomore Jacob Currin, No. 62, were among the many on-field contributors to an outstanding season for the 2019 Chargers junior varsity football team.

Central High School’s junior varsity (JV) football team may have fallen narrowly in its season finale against host Goochland High School last week, but this could not stop the Chargers from finishing the 2019 season with a share of the James River District championship.

“We’re at least going to be co-champions with Goochland, and maybe Prince Edward gets a piece of that depending on what they did,” Central Head Coach Mike McGrath said.

The Chargers finished the year with a 7-2 overall record, including a 6-1 mark in the district.

Their lone district loss came Thursday, Oct. 30, via a 17-14 final score against the Bulldogs.

“They kicked a field goal with 16 seconds left to get us,” McGrath said. “And then it was a couple of crazy things that went on right before that. They basically ended up getting five downs because of an inadvertent whistle. But the referee didn’t tell me there was an inadvertent whistle, so I thought we had it stopped. I was prepared to go to overtime, and then they start lining up to kick a field goal.”

He estimated that it was a 27-yard attempt.

“I thought we had a chance to block it, but he got it off and made it,” McGrath said of Goochland’s kicker. “He’s a really good kicker. How many ninth-grade kids do you see kicking footballs into the end zone?”

With the remaining seconds on the clock, “we made some plays and tried to win it but ran out of time,” the coach said.

The loss could not dampen his spirits with regard to his team’s season overall, though.

“I couldn’t be happier with it, because we only had four returning players, and then we had I forget how many eighth-graders on our roster,” McGrath said. “I know at one point we started, in a couple games, like, six eighth-graders, which we’ve never done before, so you’ve got to be happy. We’re the smallest school in the district, and we finished at the top. No complaints.”

The coach had difficulty pinpointing specific individual standouts because of the number of contributions made across his team’s 35-player roster.

“It was kind of like someone different stepping up every game, so it’s kind of hard to single somebody out,” he said. “We used a slew of running backs — all of them did well. We played different people around on defense, and they did well. Those boys played hard together, they really did. I told them the foundation has been set. If they can stay together and get all the way up through the time they’re seniors, (they’re) going to be looking pretty good, I think.”

McGrath noted he does not expect the JV team to lose many players to the varsity team next year since so many of them are still quite young.

“I think we’ve got a big group coming up from the middle school again, so I’m expecting we’ll have close to 35-40 next year,” he said.

When asked if the prospects look good for another 7-2 year or better in 2020, McGrath said, “We’ll cross our fingers on that one.”

“I think the program’s on an unswing right now, I really do,” he said. “I think we’ve got everybody headed in the right direction. The kids have bought into what we do, and that’s a lot of it. If they believe in it, then you can do something with them.”