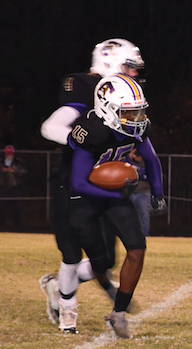 Central High School’s varsity football team concluded its 2019 regular season on Friday, Nov. 1, by taking on Goochland High School, a Virginia High School League Class 3 school that was undefeated in the district, and the Bulldogs were able to stay that way by defeating the shorthanded Chargers 61-13.

“It was pretty ugly,” Central Head Coach Will Thomas said.

The loss drops the Chargers to 5-5 on the season, but it did not change the fact that they are playoff-bound.

Central now has a bye, which could allow key time for healing as the team was without some of its standouts against the Bulldogs, including seniors Daequan Lee and Khalil Wood. Senior T’zion Wilkerson continued to be limited to playing only defense.

“We were missing quite a few, but still Goochland played well,” Thomas said. “… I don’t know how much (the injured players) would have helped us, but it would have been nice to have some of them there, but Goochland’s a good team, and we didn’t play well. We turned the ball over many times, which we’ve been really good about lately, not turning the ball over, so that was one of the key things.”

As for the Chargers’ final seeding in the eight-team Region 1B Tournament, Thomas said, “We won’t know until Friday. It’s kind of tight with which way it goes. Right now, we’re fourth, which would mean a home game, but anything could change.”