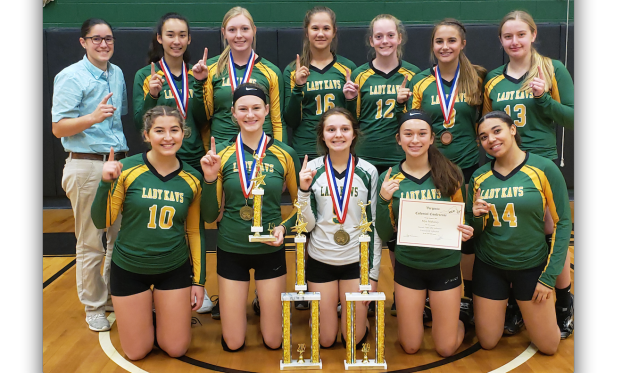 Kenston Forest School’s varsity girls volleyball team paired its Virginia Colonial Conference (VCC) regular season title with a VCC Tournament championship Saturday, Nov. 2, when it took on rival Banner Christian School in the tourney title game, rebounding from a 3-1 Oct. 17 loss to the Lady Bearcats by orchestrating a 3-1 victory of its own.

“They were fired up,” Kenston Forest Head Coach Brittni Jones said of the Lady Kavs. “Our hitting was on, our serving was on. I think we averaged at least 15-20 kills per game, and our serves, our serves were killer. They just couldn’t receive our serves very well.”

As for the difference-maker separating Oct. 17 from Nov. 2, Jones pointed to Kenston Forest’s team camaraderie.

“It definitely strengthened, and they came out, and they played as one unit instead of individual parts,” the coach said.

And each individual part did its specific job to help form that singular unit. Sophomore middle hitter Shelby Gunn finished the match with 14 kills, as did freshman middle hitter Hanna Mahaney. Sophomore libero Taylor Maione ended up with five aces and 16 digs, and junior setter Mya Mahaney had 25 assists.

“They all serve extremely well, but Shelby Gunn … and Hanna Mahaney had several aces, and Molly Epperson brought us back,” Jones said, referencing a time when Epperson helped completely erase an 11-3 deficit.