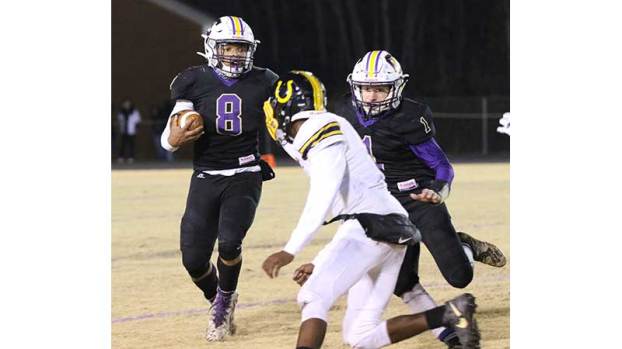 Central High School senior running back T'zion Wilkerson runs with the ball as senior quarterback Ben Anthony, No. 1, prepares to provide a block against visiting Franklin High School on Friday night, Nov. 15. The No. 4 Chargers fought hard but ultimately fell 24-19 to the No. 5 Broncos. (Photo by Titus Mohler)

Chargers fall 24-19 in Region 1B quarterfinals

Central High School’s varsity football team produced some outstanding plays Friday night, Nov. 15, and even seemed destined to win at multiple points, but visiting Franklin High School was able to score a go-ahead touchdown with 1:27 left to play to win 24-19 in the Region 1B Tournament quarterfinals.

“We just got outplayed, out-coached,” Chargers Head Coach Will Thomas said. “… Kind of like the rest the season that we’ve had, when we’ve had a chance, (defensively,) third down has been our bane — we can’t get off the field. We make good plays, and we get them in third-and-long. We could go back to the last couple years. It’s a bad down for us. And then we didn’t play very well offensively.”

He did mention some highlights, however, noting the effort his seniors put forth, including senior T’zion Wilkerson, who played well on both sides of the ball.

Senior Darien Jones scored on a long run to help give the No. 4-seeded Chargers an early 7-0 lead.

The No. 5 Broncos responded quickly, using two long runs to lead to a 7-7 tie less than three minutes into the game.

Franklin went up 10-7 on a field goal near the start of the second quarter, and Central’s offense could not respond. But then the Chargers defense showed it could halt the Broncos’ momentum, forcing them to punt.

On the ensuing drive, Central sophomore Hunter Lacks connected with sophomore Nyjae Carter on a long touchdown pass with one minute, 20 seconds to go in the half. The kick for the extra point failed, but the Chargers went into halftime with a 13-10 lead.

The Broncos received the ball to start the second half, and Central’s defense was able to bottle them up again, creating a 4th-down-and-4 situation. Franklin elected to go for it, and Chargers senior Kawonté Ragsdale recorded a crucial tackle to create a turnover on downs.

On offense, Central found itself in a 4th-and-4 situation of its own, but the offensive line created a hole for Lacks, who drove ahead for the first down. The drive was capped by a two-yard touchdown run from senior Daequan “Lee Man Lee” Lee, who was still recovering from an injury but played through the pain most of the night.

The Chargers’ two-point conversion throw failed, but they had taken a 19-10 lead with 11:56 remaining in the fourth quarter.

Franklin was not finding much success initially during its next drive, but then a big pass play turned things around, leading to a short touchdown run and a two-point conversion run that suddenly made the score 19-18 with 9:31 still left on the clock.

Central fumbled on its ensuing possession and turned the ball over. The Broncos were a second away from crossing the goal line with the ball to take the lead when the Chargers defense punched the ball lose and recovered it in the end zone, prompting an abrupt turnaround that gave Central the ball.

The offense was not able to capitalize, though, and Franklin received another chance to take the lead with a drive starting at the 5:48 mark. The Broncos twice survived fourth down on this drive, once because the defense committed a 5-yard encroachment penalty on a 4th-and-4 play.

Nevertheless, Central’s defense weathered these setbacks to create a 3rd-and-14 situation with 1:38 to go after Jones and junior Mark Strigel II made a tackle in the backfield on first down and Franklin threw an incompletion on second down.

But the Broncos were able to complete a big pass up the middle on the next play for a touchdown to take a 24-19 lead with 1:27 on the clock.

Central tried to move the ball down the field through the air on its ensuing drive, but the Broncos were able to grab an interception to help seal their win.

The Chargers finished the season with an overall record of 5-6.

For more coverage of Central’s playoff game and the 2019 season, see the Nov. 20 edition of The Dispatch.