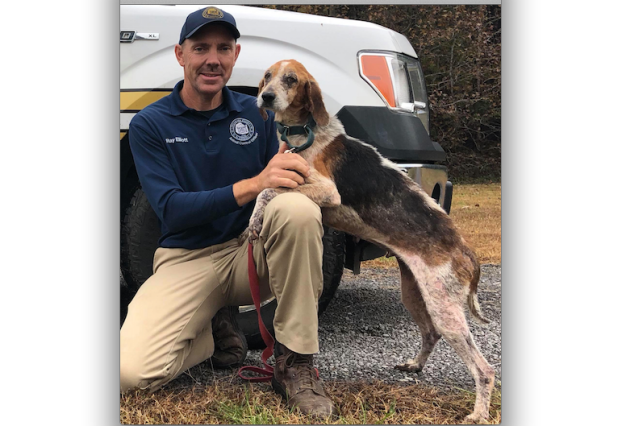 Most of us will be spending Thanksgiving Day enjoying great food, parades, or football games. But not Animal Control Officer Ray Elliott, he will be Ruff-N-It again. All in the name of bringing awareness to the community of the overpopulation of cats and dogs in Lunenburg County and the need for having animals spayed and neutered.

“The No. 1 problem in Lunenburg County is the overpopulation of cats,” said Elliott. This year there were over one hundred cats and 300 dogs that were released by owners. Many times, these cats and dogs have not been spayed or neutered and the cycle begins again of homeless animals. Through the efforts of those like Officer Elliott and the Southside SPCA over 85% of the animals in the Southside SPCA have been adopted this year.

The last four years have been very successful in raising awareness and providing funds to help neuter and spay those animals. Elliott will spend Thanksgiving Day in lock up from 6 a.m. – 6 p.m. in a dog run at the Lunenburg County Animal Shelter located at 1320 Old Mansion Road.

This year the fundraising goal for Lunenburg County is $12,000. To make this fundraiser more competitive and help a wider audience, new this year will be Lunenburg County Animal Control Officer Elliott versus Prince Edward County Animal Control Officer Adam Mumma in a friendly competitive Ruff-N-It challenge to see who can raise the most money to go to specifically the Spay and Neuter Program in their respective county. The officer who raises the least amount of money will clean the other officer’s facility for a day. It’s clear, however, that the real winners are the dogs and cats that will benefit from the money raised.

In addition, this year Jay Dayton will be cooking Boston butts on Nov. 25, all proceeds will go directly to this year’s fundraiser. Anyone interested in purchasing a Boston butt should contact Dayton at (434) 480-2332 or Officer Elliott at (434) 917-9065 to place an order.

Officer Elliott said, “contributions can also include towels, linens, supplies of any kind to help the needs of the local SPCA.” Donations can be made online via Paypal at http://www.southsidespca.org/get-involved/donate-online and Venmo @Friendsof-PEAnimalControl, by mail, or stop by the shelter on Thanksgiving Day. Checks should be made payable to Southside SPCA. Mail donations to Ray Elliott, 797 Starlight Lane, Kenbridge, Virginia 23944. Tax receipts are available. When donating online, be sure to specify for which county you are donating.

During its final meeting of the year the Lunenburg County Chamber of Commerce named Chris Craft as its new president.... read more