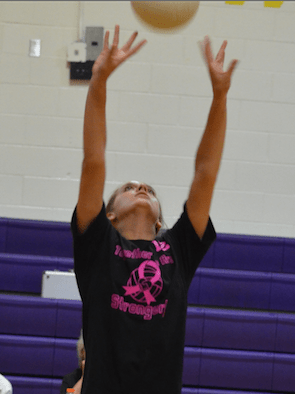 Central High School junior Hayley Moody sets for her team during the 2019 season.

Growth from beginning to end

Central High School’s varsity girls volleyball team finished the 2019 season with an 0-20 record, failing to qualify for the Region 1B tournament, but there were things to celebrate that the win-loss record did not highlight.

“I think the team as a whole showed great improvement from where they began the season,” Lady Chargers Head Coach Alan Hershberger said. “Of course the win-loss record is disappointing, but we grew a lot as a team from beginning to end.”

When asked which match featured his team’s best performance this year, the coach said, “The one that immediately comes to mind was our match at Prince Edward. Of course the outcome wasn’t what we would have wanted, but the team really came together that night and played with a ton of energy and drive. The girls just played really well individually and especially as a team.”

Considering some areas of needed improvement that he plans to focus on with players in the future, Hershberger said, “Teamwork and just working on enhancing each player’s knowledge of the game.”

Nine girls made up the 2019 Lady Chargers roster, and the team will be losing three girls due to graduation: Hannah Breedlove, Katie Morris and Savanna Fowler.

Hershberger said the team will miss that trio’s “leadership and effort every day at practice and their willingness to do whatever was asked of them.”

He confirmed that some members of Central’s small but highly successful junior varsity team could be brought up to varsity next year.

“It’s possible that some of those players would have been moved up to varsity this year had there been more players,” he said.

Central High School’s junior varsity (JV) girls volleyball team had no substitutes for much of the 2019 season, but the... read more