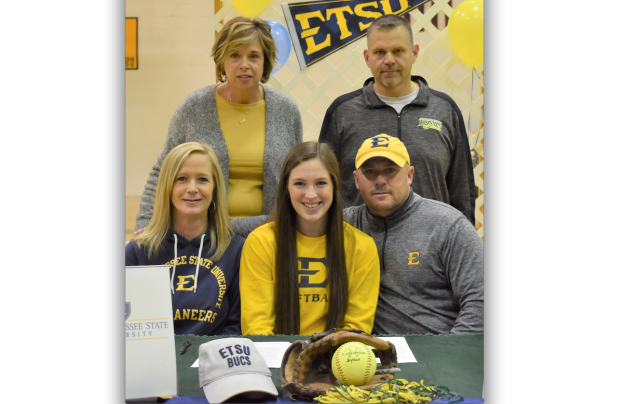 Coleman to play softball for the Buccaneers

Kenston Forest School senior softball standout Peyton Coleman has one more season left to play for the Lady Kavaliers during which she will help defend the team’s 2019 state championship, and then she will step up to the NCAA Division I level at East Tennessee State University (ETSU).

Coleman, who verbally committed to the ETSU Buccaneers at the beginning of her sophomore year, formalized that commitment with a signing ceremony last fall that included family, friends and coaches.

Describing what it meant to play well enough to command the interest of a Division I school, Coleman said, “It just made me feel like all the time and work that I have put into the sport that I’ve played since I was 5 years old, it finally paid off, and everything was for a reason. So, I was super, super happy.”

Asked how long it has been a goal of hers to play college softball, she said, “Probably since I ever started playing, honestly, because I had an older cousin, and she was like two years older than me, and from the get-go, she wanted to, and so just looking up to her as like a role model, I just automatically wanted to play at a bigger level.”

She had interest from multiple schools at that bigger level, including the University of Virginia (U.Va.).

Her father, Jodi Coleman, said that seeing Peyton sign to play Division I ball was emotional.

“I guess while we were going through it, it seemed like a pretty long process, but now looking back at it, it kind of happened pretty quickly,” he said. “But no, her mom and I and siblings are pretty proud of what she’s done and has accomplished, and a lot of it was just strictly by her being self-driven and motivated to do what she loves. That’s the biggest thing is that she loves the game, and so it’s been very rewarding.”

“If anyone would go play at the next level, it would be her,” Coley said. “She has the best attitude — great player and team leader.”

Coleman is a middle infielder, playing shortstop for the Lady Kavs and second base for her travel ball team, the Hanover Lady Hornets, though she has also spent time in the outfield for the Hornets. She said she was recruited for second base by ETSU.

In the classroom, Coleman plans to major in biology.

After she graduates, “hopefully I can start vet school, but (I’m) not sure yet,” she said.