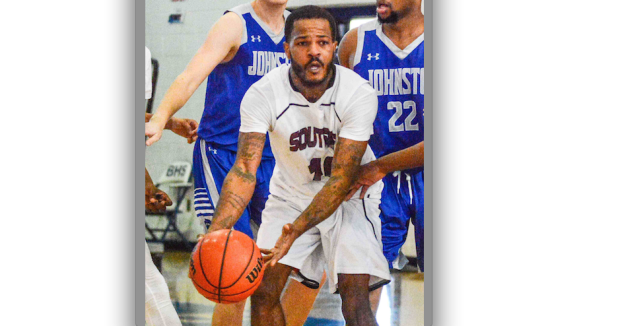 Southside Virginia Community College’s Aaron Logan looks for an outlet for the ball during the Panthers’ 74-72 win over visiting Johnston County Community College on Sunday afternoon, Jan. 26. Logan led his team with 20 points and 15 rebounds in the victory.

The victory improved the Panthers to 5-7 on the season.

With the game tied at 72, SVCC guard Rick Sullivan drove into the paint and hit a runner at the buzzer for the game winner.

Sullivan scored all 14 of his points in the second half and added five assists and four rebounds.

The Panthers fell behind early in the game but fought back as a bucket by Marctavious Holmes and a big dunk by DeAndre Miles cut the Johnston County lead to 16-12 in the first half. Six straight points by T.J. House kept his team within four, 24-20, but the visitors took a 34-30 lead into halftime.

Playing for the team this year is freshman Khalil Moore, a Central High School graduate.

Guard Maureon Tisdale-Couch, of Victoria, is back this season in his junior year as a key contributor on the Fuqua... read more