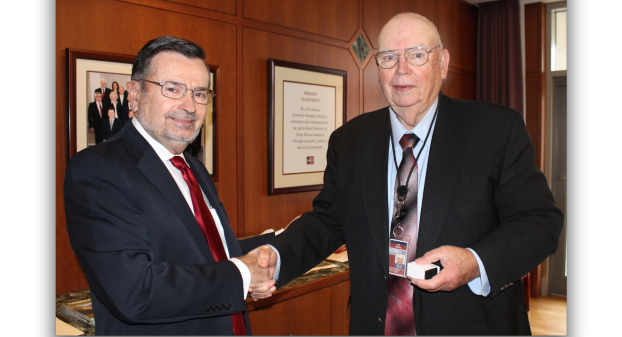 Lunenburg County grain producer and former tobacco grower Jerry M. Jenkins was recognized Tuesday, Jan. 28 for his 45 years of service on the Virginia Farm Bureau Federation (VFBF) board of directors.

VFBF President Wayne F. Pryor presented an award to Jenkins at the board meeting in Richmond.

Jenkins is serving his 16th term on the VFBF board and recently was honored with the organization’s Distinguished Service to Farm Bureau Award during the 2019 VFBF Annual Convention.

In addition to his Farm Bureau involvement, Jenkins is a former member of Virginia’s Tobacco Indemnification and Community Revitalization Commission.

Before he began farming in 1963, Jenkins worked as a Virginia Cooperative Extension agent in Gloucester County and as a teacher in Brunswick and Nottoway counties. He also served as a supervisor of tobacco production in Venezuela for British American Tobacco Co.