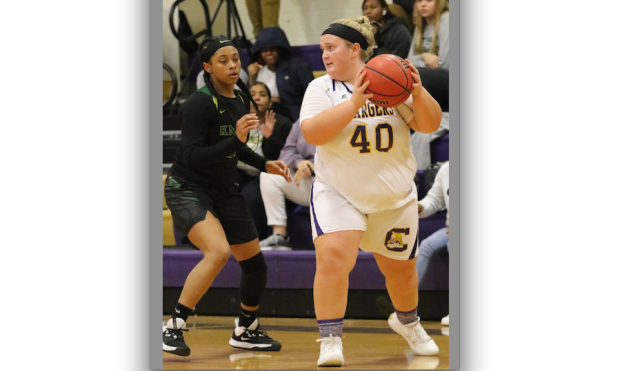 Central High School senior center/forward Savanna Fowler was an important leader for her team this season. Her 3-point shooting and strong rebounding kept the Lady Chargers competitive in many games.

‘A season of transitions’

Change was in the air for Central High School’s varsity girls basketball team during the 2019-20 season.

“Looking back it was a season of transitions,” Lady Chargers Head Coach Thomas Collins said. “We had a change in the coaching of the teams, and the team experienced a number of events that impacted (it) on and off the floor.”

Central finished the season with an overall record of 2-18 and fell short of qualifying for the Region 1B Tournament.

“I think that part of the reason for the lack of success on the court was due to the fact that we really could not put it all together for one whole game,” Collins said. “We had parts of games that were just great and others that put us in such a hole it was impossible to dig ourselves out.”

The Lady Chargers did not draw any all-district honors this year, but Collins pointed to a positive in that.

“There were a number of players that stood out at times during the season, but no one individual ‘stand out’ player,” he said. “I think that is a good thing team-wise but not so much for individual honors.”

Three players Central will be without next season are the team’s three seniors — guard Brianna Anderson, center/forward Savanna Fowler and forward Aaliyah Alexander.

Collins said the team will miss these players’ leadership on and off the court.

“They have grown as players and individuals throughout their time with us and contributed greatly to the success of the team,” he said.

The coach noted Anderson came to the team as a junior, was a solid practice player and had many skills that could not be taught.

“Her lack of experience kept her from getting to the floor a lot, but she made the most of it when she did,” Collins said.

He said he has worked with Fowler since she was a freshman, and she has grown as a player and always helped keep her teammates’ spirits up.

“Her dedication as a leader and a player were unmatched,” Collins said. “Her playing time increased this year, and her 3-pointers kept us in many games along with her strong rebounds.”

The coach said Alexander has been in the Central girls basketball program since she was an eighth grader.

“She has given much and helped the team on many levels,” Collins said. “She has been the leading scorer in many games in which she has played and always created turnovers with her tenacious defense.”

He added that she had some health issues this year that caused her to miss some games and limited her playing time at the end of the season.

“With all three players there are so many memories that will last our lifetimes, and we are sorry to see them go,” Collins said. “They will be successful because they are good people. We wish them well.”

Meanwhile, Collins and the team have also begun thinking about what comes next for the Lady Chargers.

“Moving forward we had a meeting about where the future of the program is going and personal responsibility for its success, what skills need to be improved and what we will look like offensively and defensively in the future,” Collins said.

He acknowledged the loss of three key seniors but said the nucleus of the team will be back next year.

“We are looking to build consistency and growth into next year’s program and believe that will lead to better, more consistent play and more wins,” he said.