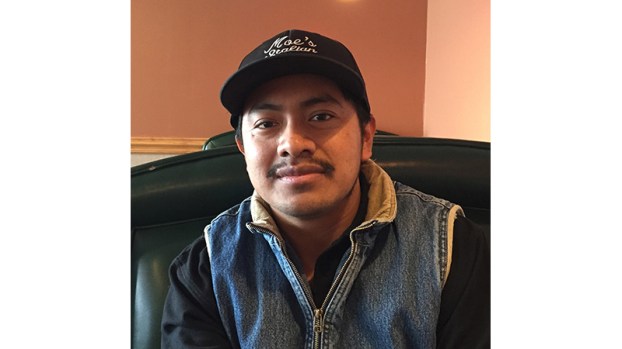 David Ramirez operates an Italian restaurant in Kenbridge and plans to expand to the real estate business.

For Kenbridge’s David Ramirez, talking about himself and his accomplishments is something that does not appear to come easily.

He talks about his voyage from Guatamala to becoming a successful restaurant owner and entreprenuer as if it is something natural that anyone can do – not a big deal.

“There’s nothing really special,” he said. “Everybody knows us.”

Ramirez operates Moe’s Italian Restaurant in Kenbridge. The location on North Broad Street is adjacent to an old gas station and garage Ramirez said he plans to remodel and open next year.

“I’ve owned the restaurant since 2009 and it is a successful little business I guess,” he said.

He said he was going to open an out-of-business restaurant on Highway 46 that was owned by a friend but turned that opportunity down after Moe’s became available.

“It was a great choice,” he said. “We’ve been tremendously busy in this area. I’m glad everything worked out.”

At that time Moe’s was operating down the street. He moved the restaurant to its new location. A grocery store and a few offices beside the gas station had to be renovated and converted to make way for the restaurant.

He said that although he is Hispanic, he never thought about changing Moe’s from an Italian restaurant but he has added some Mexican food like quesadalias and wraps.

This is Ramariz’ first restaurant he said it has been difficult but he has found the job to be a good fit for him and something he really enjoys.

“It’s a lot of hours,” he said. I come to work and I am happy because this is what I love to do. It’s not like some other jobs where you hate going to work. I love doing this. Every day I got to work, it’s easy, I like it.”

Ramirez came to Kenbridge from Guatamala.

“Where I grew up, most of my friends, they came to America,” Ramirez said. “One day I decided, let me try to go up there as well.”

Ramirez came to Kenbridge to work at Virginia Marble. One of his best friends lived there working at the marble plant before he arrived. Ramirez worked for Virginia Marble for more than five years before he began working part-time at the restaurant before taking it over.

He said it was not difficult to immigrate to the United States in 2004.

“We came in and applied for work pemits and then it was approved so I came up here,” he said.

Since coming to the U.S., Ramirez has spent some time traveling around. He said he has seen around half the country so far. He has been to Texas, New York, all over the east coast.

“I haven’t been to the west part yet,” he said. “I want to go to Alaska someday. I have a friend who lives in Alaska.”

He said his biggest challenge in coming to America was learning English.

“I didn’t speak English at all when I came to America,” he said. His ancestors were original Mayans so he spoke Mayan and Spanish. “That was the biggest challenge because English is not the hardest to learn but it is a little hard when you are already an adult and trying to learn another language.

He said he knows about 80 percent of English now.

Future projects for Ramirez include getting the gas station next door going.   He is also looking forward to getting into the real estate business.

“There is only so much money you can make in a restaurant,” he said. “You can make a living out of it, but you can’t get rich out of it,” he said. “So in order to be successful you have to look for bigger projects. I’m starting to invest in real estate and hopefully I can expand and get bigger.

“I always have the mind to look for bigger projects and have bigger dreams.”

A family of two adults and 10 children were displaced from their home on Trailer Park Road in Victoria Wednesday,... read more