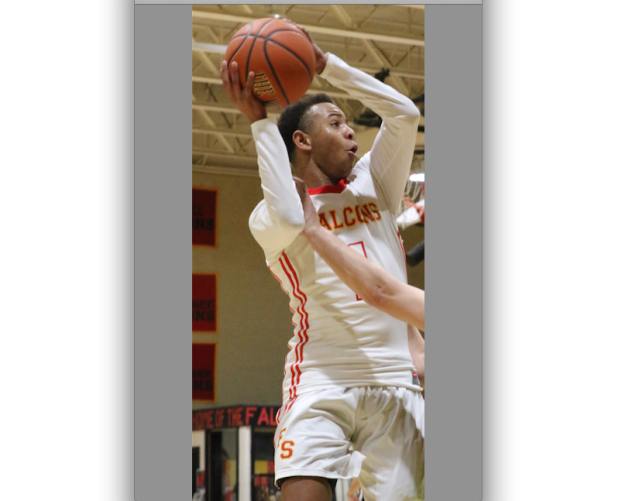 Fuqua School junior guard Maureon Tisdale-Couch, of Victoria, competes in an exhibition game against alumni on Senior Night. He demonstrated clear development as a player this past season and figures to be a major focal point of the 2020-21 Falcons squad.

“I feel like it was a good year,” he said. “We played a lot of tough teams, and it helped out a lot.”

The Falcons finished the season with a 9-11 overall record.

“We played against more competition, bigger players, bigger schools,” he said. “It was a good experience for me to see what I’m coming up against in the future.”

“His junior campaign kind of started out a little slow, but at the end of the season, he really started to improve, and it got a lot better,” Edwards said. “He started making a lot more of his free throws, was more consistent from the 3-point line, and he became even better finishing around the basket.”

Tisdale-Couch was a consistent starter for Edwards this season, but the coach would also rest him and then deploy him strategically during the course of a game.

“He would come in in certain spots where we felt as if we might go small, and so I would put him at the four spot instead of him being a point or a shooting guard,” Edwards said.

The 6-foot-2-inch Tisdale-Couch said playing at the four, the power forward position, was new for him in high school ball.

“I usually always played the guard, but this year was a small lineup, so if he needed me down low, I had to go down low,” Tisdale-Couch said.

Entering next season, the Falcons will be without three key contributors due to graduation — guard Jaylen Hempfield, forward/guard Matt Osborn and guard Drew Osborn.

Edwards expects Tisdale-Couch to be a major focal point with the team for the 2020-21 campaign.

“I know we’ll have a couple guys that’ll move up that will be young, so he will have to step up in a leadership role and be very vocal in how he wants the team to be run, because he would be looked at as a leader for next year,” Edwards said.

As far as the position Tisdale-Couch will play, Edwards said he is going to have to play a lot of everything.

“But I know he’s capable of doing that, especially defensively,” the coach said.

“He can guard one through five for the most part, and we’re going to be counting on him to really do a whole lot for us next year,” Edwards said.

Tisdale-Couch is already focused on a facet of his game that he wants to develop further to help the Falcons.

“My jumper improved a little bit this year, and I’m in the gym a lot over break, (in) the offseason,” he said. “I expect to get that a lot better for next season, for my senior season.”

He is playing now for a travel ball team called the Hill City Crash, based out of Lynchburg. He said he will play for that team in the spring and the rest of the summer until about August when school starts back up.

The two teams have the same schedule and play at the same time on separate fields. Listings in bold are... read more