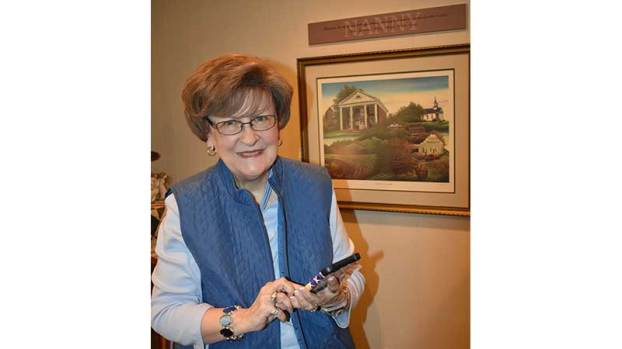 Anne Hamlett has the pulse of the community at her fingertips with the Victoria Christian Church Prayer Ministry. (Photo by Roger Watson)

A woman asks for prayers for her mother who suffered cuts after a hard fall.

A child with a fever of 104 degrees, the death of a man in an automobile accident, a sister with an upcoming back surgery and a grandson having his adenoids taken out all led to requested prayer in a Facebook group that grew from an email problem to a caring community of almost 1,400 members.

While others use Facebook to advance their political views, make friends jealous over expensive vacations or post endless photos of dogs, Anne Hamlett of Lunenburg County has used a private group to offer prayer for anyone and everyone in need.

The Victoria Christian Church group Facebook page is a modern-day prayer phone tree started by the church secretary who turned the normal weekly prayer list in the church bulletin into a daily mission for those in need of divine intervention.

“I started sending emails to the church members that have email,” Hamlett explained. “Then, at some point in time, about five years ago, my email stopped working for a short period of time, and I couldn’t figure out what the problem was.”

She had a friend who suggested she begin posting the prayer requests on Facebook, and that’s when the traditional prayer list became an interactive communal ministry of intercessory prayer.

In addition to prayer requests, Hamlett began posting daily devotional thoughts after the church did a study on the “War Room” movie, a film about the power of prayer.

“I think the Lord leads me, and sometimes it makes me feel really good when people respond with, ‘Thank you, I needed that today,’” Hamlett said. “That makes me feel like the Lord is leading me to say something that is going to touch somebody else.”

Hamlett said the Facebook page is also about building community.

“I had no idea that it would grow to that extent,” she said. “I started it primarily as a backup to my email that wasn’t working right, but maybe God had a plan as I feel he does for our lives.”

The 77-year-old widower, who is also an “enthusiastic member of the Lunenburg County Historical Society,” said this page and providing comfort and connections through prayer have become her ministry.

“This seems to have become kind of a mission of mine,” she said. “I love the thought of building community to where we are concerned about one another.”

Hamlett said as a facilitator of the private Facebook group, she has been able to have some one-to-one interaction with several of those in need of prayer in the group.

“There are a number of people that I have sort of become a counselor to through Facebook Messenger, who don’t want to publish everything about their lives, but they will open up to me,” she said. “I have met people in this county that I would have never come across otherwise.”

Hamlett, a former teacher at Lunenburg’s Central High School, said she has seen the power of prayer through the group.

“We have a lot of people we pray for who get well,” she said. “God has a plan for his people, and we believe the power of prayer is helpful because God gives you comfort. We believe that God listens. We believe that he hears us.”

Hamlett remains heavily involved in the Victoria Christian Church. She provides information for the weekly bulletin, selects the hymns each Sunday morning and plays the church organ.

She recently experienced the other side of the prayer group as a post identified her as going through a medical issue and needing prayer. Soon, there were 207 comments holding her up in prayer, giving virtual hugs and expressing sympathy for her condition.

“I love this Lunenburg community that I grew up in, and I love the people here,” she said.

PROGRESS: Her passion is justice

Trudy Berry’s passion for the justice system and helping those in need led her to seek the Virginia House of... read more