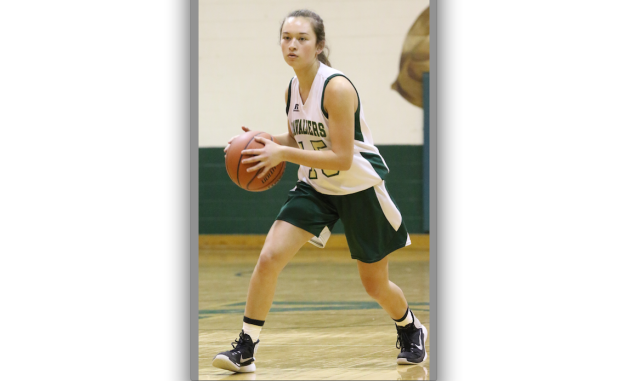 Lady Kavs take steps of growth on the court

Kenston Forest School’s varsity girls basketball team may not have finished with a winning season, but the squad’s performance represented clear progress in the right direction according to Head Coach Brittni Jones.

“We definitely improved from last year,” she said. “We’ve still got a ways to go to get back into that basketball mentality and drive like we have in some of the other sports, but all in all, the kids played well. They had a good time.”

The Lady Kavaliers finished the 2019-20 campaign with an overall record 7-22.

“If we could take some of those games back that we lost by a couple points here and there, or we just didn’t have our best showing, our record would have been a lot better, but in all, the kids did a great job,” Jones said.

The season came to a close in the Virginia Colonial Conference Tournament, with Kenston Forest falling in its first game, 48-19 to host Blessed Sacrament Huguenot Catholic School.

A variety of girls distinguished themselves on the court for the Lady Kavs this season.

“Shelby Gunn got first team all-conference, and Molly Epperson got second team,” Jones said. “But you had your workhorses in there, like Mya Mahaney. She led us as a point guard, and she was kind of our rock all year.”

“Hanna led the team in blocks, and she was up there in rebounds,” Jones said. “She was one or two with our rebounding.”

“Those girls right there definitely led us a long ways, especially Mya handling the ball,” Jones said. “She took a lot of pressure off of some of our other ball handlers to get open for shots. She had a lot of assists. She handled the pressure well, never folded under the pressure.”