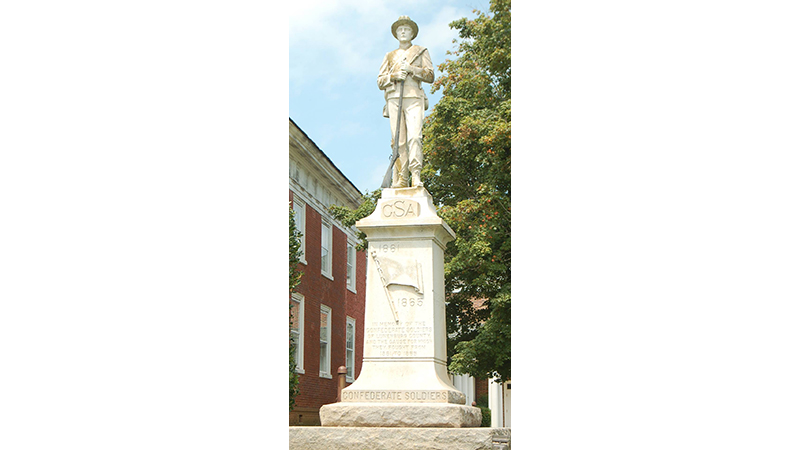 The Confederate Soldier statue on the Lunenburg County Courthouse lawn has only been there since 1968. It was moved to the location from Victoria’s Town Square, along with a German Howitzer cannon. A letter calling for the removal of the statue has been sent to the Board of Supervisors. (Photo by Wanda Fix)

In a letter addressed to Charles R. Slayton, the chairman of the Board of Supervisors, Rev. Wiley Wallace and Carole Wallace argue that now is the time for the statue to find a new home.

“To have the Confederate soldier in front of the courthouse, which is meting out justice to all citizens, is not in my mind, or my husband’s (who is a retired clergyman) is not the proper and appropriate image that should be projected in our county,” Carole Wallace said in an interview Monday afternoon, June 15. “It’s our opinion that we should take the lead on this and move the soldier to an appropriate location.”

Rev. Wiley Wallace is a Lunenburg County native who has served as a minister at several churches in the area. Carole Wallace, a native of Philadelphia, said she spent 38 years working in the department of corrections and served as a warden at the Lunenburg Correctional Center.

“I am well aware that perception is very, very critical, and leading by example and ensuring people know where you stand on issues is critical,” she said while explaining that people of color should not have to walk past the statue while entering the courthouse to seek equal treatment under the law.

The statue has not been in front of the courthouse for a long time. In a 2017 article about the monument, Lunenburg County Administrator Tracy Gee said the Confederate Soldier monument was initially placed in the Victoria Town Square in 1916. The statue was moved to the front lawn of the Lunenburg County Courthouse in 1968, along with a German Howitzer cannon.

“It doesn’t convey equality for all because of what the Confederacy fought for, and I think that is what needs to be remembered and put in an appropriate location, but doesn’t need to be remembered in front of the courthouse where equal justice needs to be meted out each and every day for all the citizens of our county,” Carole Wallace said.

The request comes just days before a new Virginia law goes into effect that allows local governing bodies to determine the fate of the more than 220 Confederate monuments remaining in public spaces throughout the state. The law, which goes into effect July 1, gives local boards the right to remove the statues if certain conditions are followed.

Wallace said one supervisor has already expressed support for moving the statue. Members of the Board of Supervisors were asked for comments concerning the letter but had not responded as of Tuesday morning, June 16.

In recent days, several Confederate statues across the state have been removed forcibly by protestors who have pulled them down with ropes and beat them with hammers as part of protests supporting the Black Lives Matter movement. The Wallaces are not concerned about that happening to the statue in front of the courthouse.

“I think the citizens of Lunenburg are measured and reasonable, but I have indeed discussed this with some of my black friends, and they agree that it should be moved,” she said. “I believe it is the right thing to do to move it.”