On January 10, she graduated as an honor graduate and dorm chief, from basic military training at Lackland Air Force Base in San Antonio, Texas. 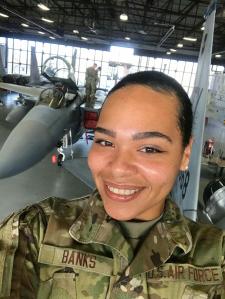 She graduated, with honors, from air education and training command, as crew chief, on April 28, from Sheppard Air Force Base in Wichita Falls, Texas. She received the AETC Commander’s Award for superior academic achievement and high standards of leadership, teamwork, and character, and the “Knuckle Buster” award for her strong initiative, outstanding fundamental maintenance practices, strong work ethics and commitment to excellence.

Banks continues her military career at Mountain Home Air Force Base in Idaho, where she will be part of the crew helping to inspect and maintain the F-15 Eagle jets for the U.S. Air Force.

Natasha is the mother of Justin Vance, daughter of Andrecko and Loretta Banks, granddaughter of Sarah Hadley and the late Gordon F. Hadley, Sr. and the late Marion B. Cradle.

Banks is a 2009 graduate of Central High School.