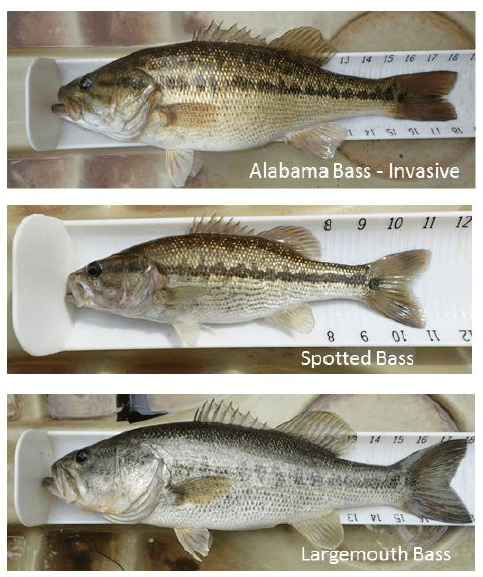 The Department of Game and Inland Fisheries (DGIF) has issued a warning about a species that has been discovered at many locations around the commonwealth.

Alabama bass (a black bass species native to Alabama and parts of Georgia) have been detected at several locations in Virginia, including Claytor Lake, Philpott Lake, Martinsville Reservoir, and Lake Gaston. 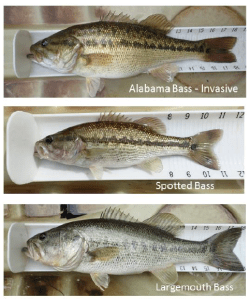 Alabama bass are nearly identical in appearance to the spotted bass, which is native to the southwestern portion of Virginia. Although Alabama bass can grow somewhat larger than spotted bass, they have a tendency to become stunted, ultimately creating a fishery dominated by small bass.

Anglers who suspect they have captured an Alabama bass should take a picture of the fish, clip off a thumbnail-sized portion of one of the pelvic fins, and store the fin clip dry in an envelope. The pelvic fins are located on the bottom of the fish, just under the head. They should then either contact DGIF at fisheries@dgif.virginia.gov or at 804 367-1293.

Citizens are reminded that it is illegal to stock any fish, such as Alabama bass, into public bodies of water without an authorization from the DGIF. Violations of this regulation are a Class III misdemeanor and are subject to a fine of up to $500. Anyone with knowledge of intentional stockings of Alabama bass should contact DGIF law enforcement at 800-237-5712 or WildCrime@dgif.virginia.gov.

More information about Alabama bass is available on DGIF’s website at: virginiawildlife.gov/wildlife/fish/alabama-bass

‘The glue that held the team together’

Whatever success Central High School’s varsity soccer team experienced the past few years, it did so in large part due... read more