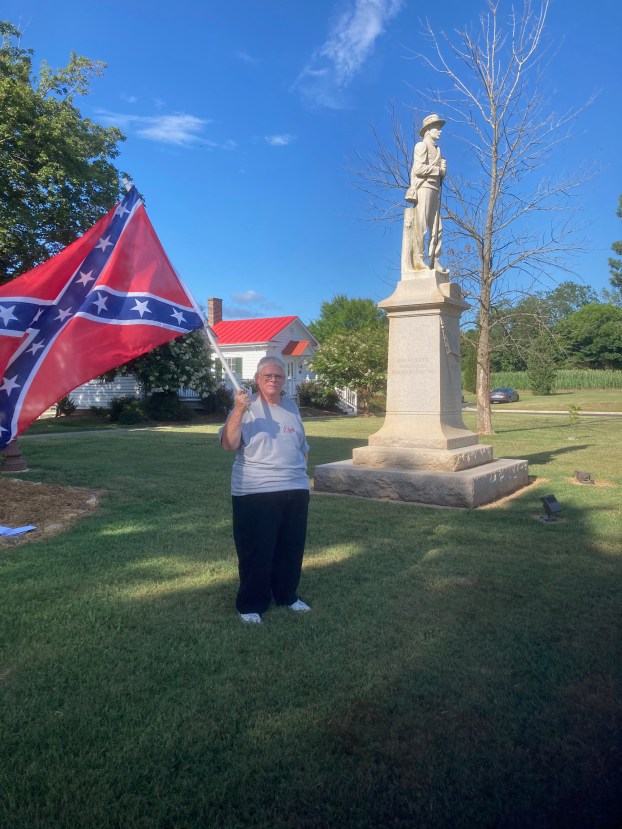 Tim Hatley expresses his support for the Civil War statue on the Lunenburg Courthouse grounds before Thursday night's Board of Supervisors meeting.

Voters to have say in fate of statue

Before a socially-distanced gathering in the courthouse Thursday night and with an overflow group in the courthouse lobby, the board voted down a motion to have a public hearing  on removing the statue before voting 5-2 to send the issue to a referendum to be placed on the ballot in November.

“It’s an issue that people in our community feel very strongly on, and I feel they should be the ones to make the decision,” Supervisor Mike Hankins said before making a motion to send the question to a referendum.

Several citizens demonstrated their feelings about the statue issue. Although the meeting was not a public hearing, five speakers were allowed to speak on the subject.

“In no way are people of color trying to rewrite history or erase it,” Patricia Harper-Tunley of Kenbridge said. “We are trying to strive for justice and present the truth of history with inclusion. With that being said, the constant reminder from the days of the Confederacy that embraced slavery, and the mistreatment of people of color being immortalized in a statue that is seen every time someone is going to the courthouse that is supposed to represent justice. It is an insult to the very meaning of justice.”

Brittney Ryan of Victoria said the courthouse is the perfect place for the statue to serve as a reminder of where we have come from as a nation and that there is much more to do.

“What better place than the courthouse, where we judge people, to remind us that we’re not perfect,” Ryan said. “We need to keep in mind that as citizens of this nation, we have growth to do.”

County Attorney Frank Rennie IV explained the three options the supervisors have under a new state law allowing localities to determine the fate of Civil War monuments within their jurisdictions.

The supervisors could do nothing and allow the statue to remain.

They could vote to advertising a public hearing to discuss potential removal of the statue. If the board voted to remove the statue after the public hearing they would have to wait another 30 days to see if a historical group wanted the statue before determining where to put it.

Or, the board could allow the citizens to vote on the statue.

Rennie read the wording of the question that will be placed on the November ballot.

“Shall the monument honoring the memory of the Lunenburg soldiers and women during the Civil War remain on the Lunenburg Courthouse property?”

Before the board voted to pose the statue question on the referendum, Supervisor Alvester Edmonds made a motion to call for a public hearing to remove the statue. His motion was supported with a second by Edward Pennington but failed 2-5.

Edmonds and Pennington were the two opposing votes in the subsequent 5-2 vote to approve the referendum.

“I cannot stand what’s going on with the state capital,” Hoover said. “I cannot stand some of the decisions the governor is making that offer no input. I think by allowing the people, the residents of this county to make the decision, I can assure you, whatever the vote is in November, that is what I am voting for.”

The question of the statue on the courthouse lawn was brought up by Rev. Wiley and Carole Wallace who sent a letter to the county last month asking that the statue be removed.

The Town of Kenbridge announced that a grant facilitated by CRC through VRSA, has allowed the town to obtain a... read more