There to congratulate Pearce was Donna Jarrell, director of Rehab Services and Mike Simmons, respiratory manager along with others from the respiratory team. 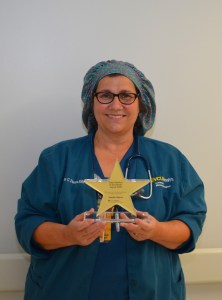 Pearce has been helping patients with respiratory issues at VCU Health CMH for more than 33 years.

“As Sandra was helping a nurse with a COVID-19 patient, she displayed compassion and great teamwork while keeping a focus on safety,” the nomination form submitted on her behalf stated. “Sandra went above and beyond to make sure the patient was cared for while also helping the nurse complete multiple tasks without hesitation.”

When asked what words of wisdom she would give other employees, Pearce said, “I have always followed the golden rule of do unto others as you would have them do unto you, which was told to me by my grandmother.  I am very appreciative that I was nominated and chosen for this award.”

Pearce is married and has two children. In her spare time, she enjoys cooking and spending time with her grandchildren.

In addition to the “star” award, Pearce received a STAR Service lapel pin, letter of commendation from the administration, a $40 gift certificate, and a parking space of her choice for the month.